From The Inquirer/Philly.com: “According to Maté, addiction is any behavior — not necessarily just drug use — that individuals cannot stop doing, despite harmful consequences, because it provides them with some relief or pleasure. He remembers a sex worker who told him that the first time she tried heroin, it felt like a ‘warm, soft hug.’ For Maté, the question is not ‘Why the addiction?’ but ‘Why the pain?’

The connecting line between addiction and hate, according to Maté, is trauma. ‘What happened in Pittsburgh is a manifestation of trauma,’ Maté told the Inquirer. ‘There is no mass killer who wasn’t a traumatized person.’ […]

Just like addiction — to drugs or classical music — provides relief to people who were traumatized as children, so does hate.

People like the shooter from Pittsburgh have, according to Maté, ‘anger [that] has got nothing to do with what they think they are angry about. They are just angry because of what life has done to them as children and then they find external targets.’ Politics plays a role, too. ‘It will give them a target and an explanation to their rage and an outlet to express their rage,’ and ‘adds more and more fuel to direct their violence toward certain groups,’ he says.

In his keynote address, Maté critiqued the view that prevention campaigns can solve addiction crises. ‘If those campaigns of “just say no” [to drugs] were so successful, why are we having a 9/11 every three weeks?’ — referring to the overdose death toll in the country.

Maté talks about hate in a similar fashion: ‘You can’t “just say no” to hate.’

‘You can’t fight hatred,’ Maté explains. ‘Telling people not to hate is not fighting hatred.’

But there are solutions. The first step is recognizing the problem.

After recognizing that there is a problem, we need to find out what causes it. ‘We have to take an honest look at ourselves as a society and as a culture and say what is it about us that foments this kind of stuff,’ he says. […]

We can reduce the harm of hate by not letting it boil over. We can vote for legislators who will enact gun laws to reduce the harm in those moments that it does. And we can create an environment that allows parents to be there for their children emotionally to prevent trauma — that includes paid family leave and stopping the fetishization of hard work.

That’s a big task, but Maté believes it is possible: ‘It’s going to get worse before it gets better, but in the long term, I don’t have any doubts.'” 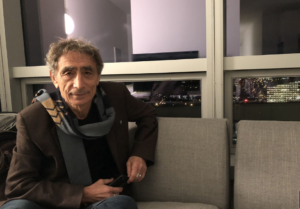