From MinnPost: “Watching the 911 dashboard, Officer Colleen Ryan saw it again: The address of a woman who calls Minneapolis police frequently during bursts of life-threatening anxiety.

Ryan notified her partner—a social worker—and the two drove to the woman in an unmarked police car. No sirens. No flashing lights. But this time around, Ryan wanted to do something different to help the woman, beyond their typical routine of giving her a ride to a hospital.

So Ryan and her partner sat down with the woman… and played a game of Yahtzee. And after 45 minutes of rolling the dice, the woman felt comfortable describing to Ryan and the social worker—a duo formally known as a mental-health co-responder team—her feelings. From there, the team shared tips and resources with the woman for if, or when, anxiety overcomes her again.

‘Now, she has a toolbox, and things that she can do differently, so that maybe she doesn’t need to make that call. She doesn’t need to be seen at a hospital time and time again. She recognizes that. But she didn’t have any other options,’ said Inspector Kathy Waite, who supervises MPD’s co-responder program that pairs police officers with mental-health professionals to help people on the verge of suicide or addressing other emotional crises. […]

‘It’s not a crime to have a mental illness and approaching [people] in a way that’s not criminalizing them, and making them afraid to call 911 and get help, is the biggest thing,’ Ryan said. ‘It’s a more comprehensive approach to mental-health calls, rather than cops also having to double as social workers and figure out these problems.’ […]

‘We can really take the time to listen to somebody; hear what they’re going through; help them feel a little bit understood… like they have somebody who just cares about them,’ [social worker Nils] Dybvig said. ‘It can make a big difference.’ […]

Law-enforcement agencies in cities such as Seattle, Boston and Houston have adopted similar co-responder models to change how officers interact with people suffering from extreme anxiety, depression or psychosis. St. Paul set aside additional money in its 2019 budget to strengthen how mental-health experts work with police, too.” 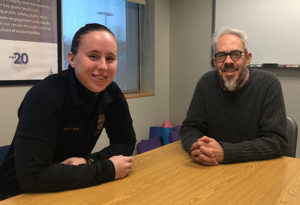