From STAT: “The drug industry’s storied lobbying group isn’t accustomed to bad news — and with its small army of well-connected advocates, it’s even less familiar with surprises.

For PhRMA, the news last winter was both.

On Feb. 7, the group’s board — made up of dozens of the CEOs of major pharmaceutical companies including Amgen, Johnson & Johnson, and Sanofi — was gathered for a meeting to welcome its new chairman. Suddenly, the gathered crew had something far more threatening to discuss: Congress had just laid out a plan to force drug makers to pay far more into Medicare — a policy change none of pharma’s lobbyists had seen coming.

A source familiar with what happened at the meeting described the atmosphere succinctly: panic.

The group — its board members, its 30 internal lobbyists, and its 150 contracted ones — sprung into action, scrambling to convince Congress not to enact the change. That two-day blitzkrieg was only the first in a series of sustained campaigns to find a way to reverse its loss — campaigns that saw the powerful group make concessions on policies it otherwise opposed and even reach out to would-be adversaries.

But all that maneuvering was for naught. On Tuesday, [January 1,] it became official: A change took effect that will cost the industry nearly $12 billion over the next 10 years.

‘This might well be the biggest political loss that PhRMA has suffered in a decade,’ Daniel Carpenter, a professor of government at Harvard, told STAT.” 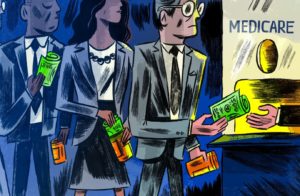