From The New York Times: “Facebook’s rise as a global arbiter of mental distress puts the social network in a tricky position at a time when it is under investigation for privacy lapses by regulators in the United States, Canada and the European Union — as well as facing heightened scrutiny for failing to respond quickly to election interference and ethnic hatred campaigns on its site. Even as Facebook’s chief executive, Mark Zuckerberg, has apologized for improper harvesting of user data, the company grappled last month with fresh revelations about special data-sharing deals with tech companies.

The anti-suicide campaign gives Facebook an opportunity to frame its work as a good news story. Suicide is the second-leading cause of death among people ages 15 to 29 worldwide, according to the World Health Organization. Some mental health experts and police officials said Facebook had aided officers in locating and stopping people who were clearly about to harm themselves.

Facebook has computer algorithms that scan the posts, comments and videos of users in the United States and other countries for indications of immediate suicide risk. When a post is flagged, by the technology or a concerned user, it moves to human reviewers at the company, who are empowered to call local law enforcement.

‘In the last year, we’ve helped first responders quickly reach around 3,500 people globally who needed help,’ Mr. Zuckerberg wrote in a November post about the efforts.

But other mental health experts said Facebook’s calls to the police could also cause harm — such as unintentionally precipitating suicide, compelling nonsuicidal people to undergo psychiatric evaluations, or prompting arrests or shootings.

And, they said, it is unclear whether the company’s approach is accurate, effective or safe. Facebook said that, for privacy reasons, it did not track the outcomes of its calls to the police. And it has not disclosed exactly how its reviewers decide whether to call emergency responders. Facebook, critics said, has assumed the authority of a public health agency while protecting its process as if it were a corporate secret.” 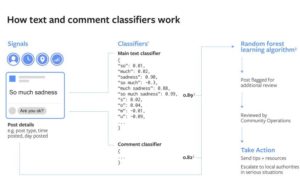