From Sprouts Schools: “Attachment theory argues that a strong emotional and physical bond to one primary caregiver in our first years of life is critical to our development. If our bonding is strong and we are securely attached, then we feel safe to explore the world. If our bond is weak, we feel insecurely attached. We are afraid to leave or explore a rather scary-looking world, because we are not sure if we can return. Often we then don’t understand our own feelings.”

The attached video gives a brief, informative introduction to this critical topic in mental health and development. 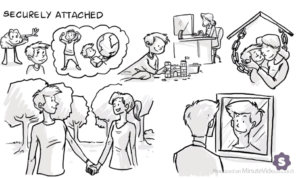