From Military Times: “Nineteen suicides have occurred on VA campuses from October 2017 to November 2018 ― seven of them in parking lots, according to data the Washington Post obtained from the Department of Veterans Affairs. Some are worried that this is a gruesome form of protest by veterans to highlight how little help they were given in their time of need by the VA system. […]

[Marine Corps veteran Justin] Miller killed himself after four days in the Minneapolis VA’s mental-health unit, and [former Army Sgt. John] Toombs did the same after being kicked out of his treatment program for not following its instructions, including being 20 minutes late to pick up his medications.

Most recently, 55-year-old Marine Col. Jim Turner shot himself in December 2018 outside the Bay Pines Department of Veterans Affairs while dressed in his service uniform. He left a disturbing note that investigators found close to his body: ‘I bet if you look at the 22 suicides a day you will see VA screwed up in 90 percent.’

There were more than 6,000 reported veteran suicides every year from 2008-16, according to the 2005-16 VA National Suicide Data Report. The same report indicated that as of 2016, the suicide rate for veterans was 1.5 times higher than for non-veteran adults.

In January 2018, President Donald Trump signed an executive order to give all veterans access to mental-health services for the entire first year of their new civilian lives. The VA told the Washington Post that it prevented 233 suicide attempts in that October 2017-November 2018 window, which mainly involved VA staff stopping veterans from hurting themselves on their campuses.” 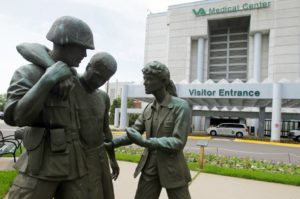