From Psychedelic Support: “Part of how psychedelics work is by increasing the amount of entropy, or chaos, in the brain. In fact, in a paper titled, ‘The Entropic Brain: A Theory of Conscious States Informed by Neuroimaging Research with Psychedelic Drugs,’ neuropsychopharmacologist Dr. Robin Carhart-Harris and his co-authors explore this very nature of psychedelics. They propose that conditions like depression, obsessive-compulsive disorder (OCD), and addiction result from too much order, or rigidity, in certain parts of the brain. Psychedelics, they argue, may help heal these conditions by disrupting that rigidity, through a mechanism much like shaking a snow globe.

Psychedelics appear to disrupt the neural patterns upon which rigid patterns of thought and behavior – such as those seen in depression, OCD, and addiction – rest. The accompanying graphic, which I’ve adapted from a similar image found in Carhart-Harris’ paper, shows how some of us are on the rigid, or low chaos, end of the consciousness spectrum, and some of us are more on the entropic, or high chaos end.

If we think of psychosis and mania as high chaos states, we can see how taking a chaos-increasing medicine like LSD might just push someone with a propensity towards mania or psychosis over the edge. When a patient’s brain is in the middle of a blizzard, after all, they don’t need their metaphorical snow globe shaken. Dr. Carhart-Harris and his team have also performed other studies in which the brain scans of people on psychedelics were compared to baseline images. This work reveals that psychedelics enhance neural crosstalk – the phenomenon by which novel connections are made between parts of the brain that don’t normally communicate with one another. […]

Someone with depression whose thoughts are focused on a very tight loop of negative, self-denigrating sentiments may very well benefit from a little increased cross talk. More neural connections might allow them to realize that life can actually be pretty awesome (or at least bearable), and that so many things are interconnected. They may realize that it’s not so scary after all to take the risk of asking somebody out on a date, to read more about geometry, science, or self-growth, or to spend a little money on a stylish new haircut.

Someone in a manic or psychotic state, however, doesn’t need a nudge in that direction. In fact, they’re already at high risk of seeing synchronicity where there is none, being overly familiar (as Dan was with me), becoming obsessed with fractals (or whatever has caught their interest), and racking up credit card debt in the pursuit of whimsies. It is perhaps for these reasons that most if not all of the studies on psychedelic medicine exclude those with a personal history of Bipolar 1 or psychosis from enrolling.” 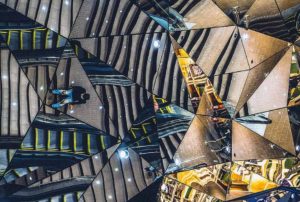