From the Lown Institute: “The United States is in the grips of an unseen epidemic of harm from the excessive prescribing of medications. If nothing is done to change current practices, medication overload will lead to the premature deaths of 150,000 older Americans over the next decade and reduce the quality of life for millions more.

Focusing on reducing inappropriate or unnecessary medications could save as much as $62 billion over the next decade in unnecessary hospitalization for older adults alone.

Every day, 750 older people living in the United States (age 65 and older) are hospitalized due to serious side effects from one or more medications. Over the last decade, older people sought medical treatment more than 35 million times for adverse drug events, and there were more than 2 million hospital admissions.

The prescribing of multiple medications to individual patients (called ‘polypharmacy’ in the scientific literature) has reached epidemic proportions. More than four in ten older adults take five or more prescription medications a day, an increase of 300 percent over the past two decades. Nearly 20 percent take ten drugs or more.” 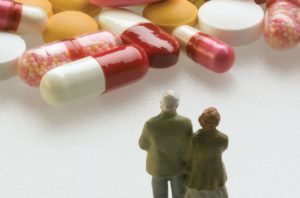