From MilitaryTimes: “Ahead of his remarks at the AMVETS national convention on Wednesday, President Donald Trump announced he has instructed Veterans Affairs officials to make a massive purchase of the antidepressant Spravato in an effort to stem veterans suicide.

The president said the drug — developed by a subsidiary of the pharmaceutical firm Johnson & Johnson — has shown a ‘tremendously positive’ effect in early testing and he is optimistic it can help with mental health problems in the veterans community. VA research shows that nationwide, about 20 veterans a day die by suicide.

‘This is a form of a stimulant where, if someone is really in trouble from the standpoint of suicide, it can do something,’ Trump said. ‘It’s pretty well known, it just came out. We have calls in to Johnson & Johnson now, we’ve been talking to them for two months on buying a lot of it.'” 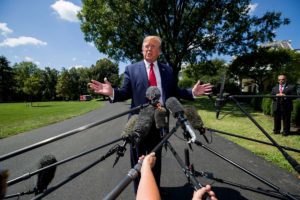