In Finland, the ancient musical tradition known as lament singing is seeing a revival . . .

‘[In lament] people can express themselves,’ Fihlman says. ‘Very often people [in my courses] make laments of their grief. They miss their parents or they have troubles in their marriage or maybe they were hurt in childhood and they never had a chance to bring it up.’ . . .

In Karelia, Fihlman says that lament singing existed in rural communities for generations, but it was viewed as a pagan tradition by Orthodox and Lutheran Christians and often driven underground. Urbanization also threatened the continued existence of lament singing. In the last century, as young people moved away from their hometowns to find jobs and schooling in cities, villages began to disappear, along with lament singers. And in the early days of the Soviet Union, authorities often employed lament for ideological and propaganda efforts, creating laments that expressed support for the Soviet system and its leaders.

Stepanova says that, eventually, only old people told ancient stories and sang antique laments. ‘They were museum items, and they stopped being a living tradition among people,’ she says.

But somehow, adds Fihlman, it survived. ‘We don’t have those old people anymore,’ she says. ‘But [now] we have this new generation.’ . . .

Hokka, 41, is part of the new generation learning from Fihlman. She says she hopes to start composing laments for young people struggling with addiction.

‘Nowadays crying is seen as losing face, so people avoid and fear it,’ says Hokka. ‘Finland needs its tears.'” 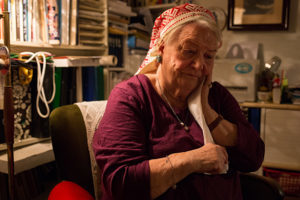