From Washington City Paper: “In January, more than a dozen staff members at St. Elizabeths Hospital—the District’s only public psychiatric hospital—carried out a premeditated ambush of an apparently calm patient. They surrounded him as he was standing calmly in a common space, and dragged him to another room where they tied his arms and legs down to a bed, pulled down his pants, and injected him with psychotropic medication. They then left him tied to that bed for hours, according to a new report by a prominent D.C. disability rights group.

Then in April, hospital staff kept another patient—who had untreated, undiagnosed fractures in his hip and arm—tied by all four limbs to a bed for almost two hours. Staff were the ones who broke his bones, and it was almost 24 hours before the man received treatment for his injuries.

And over the course of April and May, counter to hospital policy, staff used extreme measures to restrict the movement of a third patient, who is a survivor of sexual abuse, seven times. Sometimes, staff pulled her pants down in front of male staff members to inject medicine into her buttocks; they repeatedly tied her to a bed or locked her up alone in a room, leaving her there for up to four hours.

These incidents are detailed in the report that the Disability Rights DC (DRDC) program at University Legal Services—an organization that monitors treatment quality at various hospitals in D.C. and advocates for disability rights—sent to the hospital and to the Department of Behavioral Health (DBH) (which operates St. Elizabeths) on Wednesday. The report describes multiple instances where DRDC claims St. Elizabeths illegally used restraint. Restraint is a controversial practice where staff control a patient by restricting their freedom of movement, generally by either physically holding them down or tying their arms and legs to a bed, and in the report, DRDC severely criticizes the hospital for using the technique far too liberally. The result, according to DRDC, has been ‘serious staff violations’ of federal and local law and ‘disturbing staff abuses’ toward patients.

Restraints were once a rare occurrence at St. Elizabeths. In the past several years, though, the hospital’s use of the technique has increased astronomically. According to the hospital’s public performance reports, in 2013, they placed patients in restraints only four times all year. In 2018, the annual count was 782. (The average daily patient population didn’t change much between those years; it was 261 in 2013 and 270 in 2018.) 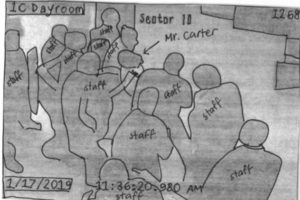