From Phoenix New Times: “The video shows a calm, still-restrained Valentina being released to use the bathroom. After she does so, she returns to the bed for uniformed officers to chain her back down. But when it comes time to lift her hands up for officers to handcuff her, she pauses. ‘It’s cold,’ she says.

Within four seconds, the officers force her arms back, and Valentina immediately begins to panic.

She sobs and shakes during the entire process. The correctional employees speak calmly, calling her only by her last name. As an officer adjusts a restraint on her right foot, she spits. It hits his cheek.

The officers yell at her, and place a spit mask over her head. A staff member of Correctional Health Services, which contracts with the jail to provide mental health services, is then seen entering for the first time.

This is the crime for which Valentina remains incarcerated. The charges of assault against the nurses at St. Luke’s were dropped a month later. The prosecutor’s office cited Valentina’s mental state as the justification for dismissing the felonies. But the office is still prosecuting her on two counts of ‘assault by a prisoner with bodily fluids’ and two counts of aggravated assault, which also appear related to spitting.

‘I guess people think once you’re an inmate, you’re an inmate, and you deserve to be there, to be punished,’ said Vangelina. ‘But when she’s going through a crisis, she’s not controlling what’s going on, either. You have to give her time to de-escalate, be compassionate. They say the people with the mental illness don’t have empathy, but I think it’s the other way around at this point’ . . .

‘The video is appalling to watch,’ said Analise Ortiz, campaign strategist at ACLU of Arizona. ‘This incident exposes systemic problems within Arizona jails and prisons in which people are dehumanized, abused, and treated unjustly.'” 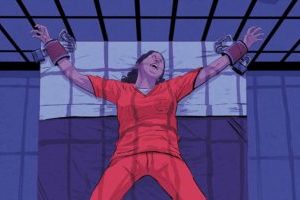