From VICE: “Vermont is a surprising case study in how things can quickly go wrong when hospitals invite police inside. At least nine of Vermont’s 14 emergency rooms, including six of its eight hospitals serving rural populations, have been cited by national regulators over the past five years for improperly calling police to help with mental health patients.

As Vermont’s Department of Mental Health noted in a report from April of this year, federal requirements mandate only hospital staff are permitted to handle patients in psychiatric care. Outside contractors, like private security officers, need to be trained and ‘under the supervision’ of hospital staff when handling patients. And police officers ‘cannot lay hands on an individual who is committing (or has committed) a crime in the emergency department unless they are going to arrest and remove the individual,’ the report said.

But those standards have been ignored in Vermont hospitals in recent years.

One 2016 hospital report describes how a patient seeking treatment for anxiety, depression and suicidal thoughts was tackled by police with an arm-bar takedown; the officers then handcuffed the patient’s arm to a bed. Five officers were called in 2018 to intimidate a patient who was refusing to accept medication for their bipolar disorder. And in two different hospitals last fall, county sheriffs called by staff Tasered two separate patients seeking treatment for mental health issues, neither of whom were in police custody at the time. Only five hospitals nationally were cited in 2018 for the improper use of Tasers; the two in Vermont were the only ones outside major urban areas.” 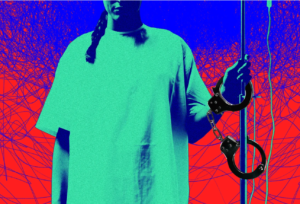