From Harvard Chan School of Public Health: “Since 2005, many leading causes of death, including cardiovascular disease, cancer, stroke, and lung disease, have been decreasing. But deaths from drugs, alcohol, and suicide—what some call ‘deaths of despair’—have been on the rise.

A panel of faculty and students from Harvard T.H. Chan School of Public Health’s Department of Global Health and Population (GHP) delved into the potential causes of these deaths at a November 18, 2019 event in Kresge G3. For the event, part of a GHP series on critical thinking about important topics, three GHP students were asked to make the case as to whether the deaths represent a political, economic, or spiritual crisis. (The topic was prompted by a recent New York Times opinion piece.)” 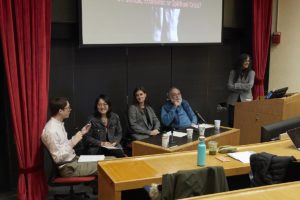