From NBC News: “A 6-year-old Florida girl was committed for two days to a mental health facility without her mother’s consent after allegedly throwing a temper tantrum at school, an attorney for the family said.

The child was allegedly given anti-psychotic medications at the center, also without the permission of her mother, Martina Falk …

Falk’s lawyer, Reganel Reeves, said a mental health counselor was called to the school because Nadia was reportedly having a tantrum and throwing chairs.

The counselor evaluated Nadia, who has ADHD and has been diagnosed with a mood disorder, and determined that she needed to be committed under the Florida Mental Health Act of 1971, commonly known as the Baker Act.” 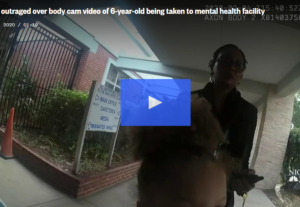