From Elemental: “Schwartz likes to joke in talks that he is planning to rewrite the Diagnostic and Statistical Manual of Mental Disorders (DSM-5), psychiatry’s bible, to explain the basis of each disorder in non-pathologizing terms of protectors and exiles, thereby challenging the dominant ‘chemical imbalance’ view. But for all the humor, his real ambitions are even greater than that. Experts in conflict resolution, anti-racist education, high school guidance counseling, mediation, 12-step addiction recovery, and a growing list of other fields have begun adopting Internal Family Systems (IFS) techniques and developing pilot programs based around its principles. Just as important, Schwartz wants IFS to transform the way we connect to each other one-to-one.

‘This is a radically different paradigm for understanding human beings than the ones that dominate our culture,’ he says. ‘If it is true that these things we think of as our inner enemies are really heroes stuck in time, that by itself allows people to relate inside with a lot more compassion and love, which translates to how they see outside enemies and relate to them.’

In an era in which Congress, the internet, and the U.S. population at large can seem just as polarized into mutually attacking parts as the ‘internal families’ of Schwartz’s most profoundly unwell patients, that’s a tantalizing message. Is it really possible that even those who most infuriate us have compassionate, relatable Selves at their core, hidden behind a screen of protectors who would gladly give up their hurtful behavior if the pain they were defending were seen and healed? As Schwartz himself often says when speaking to new crowds, it would certainly be wonderful if it were true.” 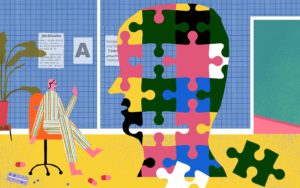