From Truthout: ” . . . social workers have a long and troubled history as partners to the state, more often serving as carceral enforcers than as collaborators toward liberation. Mimi Kim has documented the history of social work’s reliance on law enforcement to address domestic violence and the many resulting harms on people at the margins. Dorothy Roberts, Don Lash and others have demonstrated how the child welfare system has served to criminalize and punish Black families and families of color. Most recently, Beth Richie and Kayla Martensen offered the term carceral services to identify social work services ‘that replicate the control, surveillance and punishment of the prison nation.’

The partnership with the state begins early on in social work education, where many students are trained via field education internships inside jails, prisons, probation and parole. However, as a 2013 study concluded, less than 5 percent of social work education offered courses with content related to the criminal legal system. And while we recognize the value of reducing harm within these institutions, the lack of education provided to social work students (among other social, economic and historical forces) often result in an acquiescence to structures of domination, and punitive and often racist ideologies.” 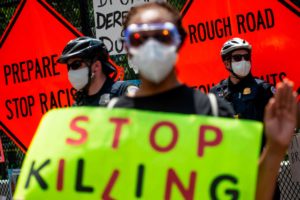