From Soteria Network: Journalist and Mad in America founder Robert Whitaker presents the evidence base for Soteria houses and explains why they are such an important initiative in helping people recover from psychosis and get their lives back.

“There is a long record of evidence that psychosocial care that avoids or minimizes use of neuroleptics can help people struggling with psychosis recover and fare better over the long-term than if they were treated conventionally with these drugs. The original Soteria project that ran for a decade in California produced such results. There is a renewed interest in creating Soteria homes (or other respites that de-emphasize use of neuroleptics), and in Israel, there are a number of such homes now operating, with insurance covering the cost of such care. A recent World Health Organization Report on Community Mental Health called for paradigm shift in mental health, away from the biological model that has governed care for the past 40 years, and toward a psychosocial model of care that is based in honoring the human rights of those who are being ‘treated.’ The WHO report pointed to Soteria homes as a model for such care.” 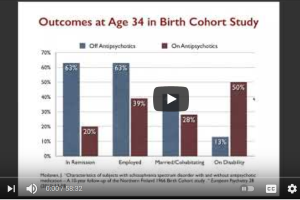