I’ve shared more about the mission of Advocacy Unlimited this past summer than at any other time in my 7.5 years of employment with the organization.

I became motivated to share in response to the feeling that the whole world around me was shouting—caught up in trying to “fix” everyone. I felt suffocated and overwhelmed as I witnessed choice and personal agency choked out by fear.

So, I started sharing about what I know, and believe. 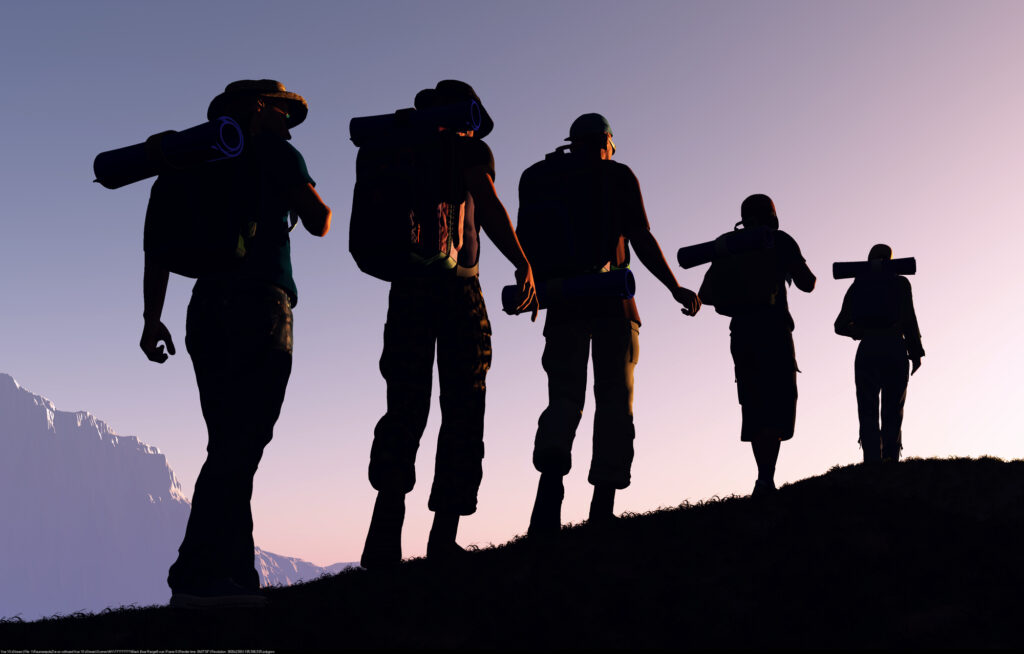 The beginning was rough.

I soon realized that it was not helpful to tell a person that what they believed about “mental illness” was not true. The response was often defensive, while some expressed anger. I did not mean to tell anyone that they were personally wrong. However, the exchange often ended in hostility.

It would begin with me saying, “Hello! I’m Michaela and we’re bringing a new program to Connecticut for people who hear voices!”

The person would respond, “You mean schizophrenia?”

Person would helpfully interject with a correction: “Schizophrenia is a mental illness.”

I was stuck in that pattern for at least a month. I tried to kindly speak about language supporting systems of oppression. However, I knew I was agitating a basic belief because of the harsh reaction evoked by my challenge of the terms “schizophrenia” and “mental illness.” It was painful to accept that I was not changing anyone’s mind by suggesting the person was misinformed.

I had to shift my approach. I decided to examine my own beliefs. What had I learned about “mental illness”?

I’ve learned that the conventional or common association with “hearing voices” is “schizophrenia.” “Schizophrenia” is a diagnostic term. It is a categorical label that defines a person as some “thing”—a compilation of reported thoughts, feelings and behaviors. If enough of what is documented sounds like the criteria of the diagnosis, then a person is “schizophrenic.”

This gets me every time. What an ugly regard to hold for another human being. What kind of society are we—telling people what they are. What an outrageous and abusive approach to walking with people who are sharing their reality. It is a privilege to be invited to hear the story of a person.

As I sat with the sensations of this knowing, I felt my body clench as I dropped deeper into what I knew.

In my experience with psychiatric services, I knew that I was possibly one more hospitalization, or doctor, away from being told I was no longer experiencing the “features of a psychotic disorder” but in fact was “schizophrenic.” That mattered to me. I didn’t want to be categorized with that specific label.

I asked myself, what made that label different?

Well, I learned that the criteria used to diagnose a person with a “mental illness” are set by medically trained professionals with extensive years of institutional experience learning, observing, classifying, and treating “mental illness.” People working in the mental health profession are trained and given a credential to affirm they know the signs and symptoms of “schizophrenia.”

The field of psychiatry and mental health treatment act from a place of power when assigning psychiatric diagnoses to people. This power is based on the premise that they have the power to “fix” a person who has an “illness.”

I get angry when I think about this.

First of all, no one can know “schizophrenia.” Knowing is experiencing. Personal experience is the only frame of reference for “knowing”—it is learned through the first-person point of view and is a feeling process.

This can’t apply to a term, such as “schizophrenia,” because the term itself was constructed through a second-person perspective.

It was constructed based on the observations of people who made what they believed qualified as “schizophrenia” the diagnosis it is today. “Schizophrenia” is a story constructed over time through messaging, words, media, videos, family, school, etc. This term grants the people who are employed to “fix” the problem with the power to deem the thing a problem in the first place. This is a system of oppression.

By that point in the summer it was late July and I was leaving in two weeks to solo backpack 50 miles in the Adirondacks and summit nine of the High Peaks.

I was preparing to enter into the wilderness and I was determined to bridge the discussion of voice hearing beyond the psychiatric diagnosis. I needed to do this because I told myself this discussion matters, and I made the commitment to speak about the program we are launching to every person I met in the wilderness. I couldn’t imagine every interaction ending in frustration.

I decided to spend the next two weeks simplifying the connection between voice hearing and “schizophrenia” through an affirmative statement: “Yes—that is the common psychiatric diagnosis.”

I soon found that using this approach was an opening for discussion.

I began again: “Hello! I’m Michaela and we’re bringing a new program to Connecticut for people who hear voices!”

The person responded, “You mean schizophrenia?”

I continued, “Yes—that is the common psychiatric diagnosis. The program we offer is a non-medically based approach—”

I was cut off with a corrective interjection: “People with schizophrenia need medication.”

I felt a tightness in my chest, and said, “Not all people who are labeled with schizophrenia need medication.“

To which the person interjected angrily, “That is not responsible. Those people need professional help. They are dangerous.”

My body aches even writing this. There is a knowing within the very cells of my body, which contract in response to this association. It hurts.

Each time I experienced this physiological reaction I noticed the thread of thoughts that followed. I slowly recognized that I wanted to fight every single person who used language based on their learned beliefs about “mental illness.” It wasn’t their hostility—it was my own. I wondered what was coming up within me that led to the full-body reaction to people expressing their opinion. They didn’t know any better—so why did I feel so angry?

It was a constant shame, blame, and ridicule of an experience that I myself can relate to. I felt completely alone in the face of a monster that was not the person standing in front of me. No, it was a monster of my own mind that believed that I am what they are imagining. That I am that “schizophrenic who is dangerous and needs to be medicated.”

I was horrified by my own rejection of an aspect of myself. I too was led to believe through psychiatric treatment that I had a “brain disorder” and the only way to “fix” myself was to take medication. With medication, I was told that I could get back to normal.

Except, medication didn’t work for me for more than a week, and beyond that I just felt lifeless. I was in a state of suspended animation. I knew that wasn’t me, and so I fought with everything I had to regain a sense of self beyond a diagnosis. However, it also meant saying that those people over there are “schizophrenic.” That is not me.

This was a difficult place to arrive at because in some ways I recognized myself in the disgust, rejection, and fear expressed by the people I was meeting.

Once I put words to my internal experience, I leaned into the discomfort. All I could do was continue to examine my own belief systems because I certainly wasn’t going to change anyone’s mind by fighting with them.

So, I reframed my intent from being right to listening and learning. What I found were moments of opportunity to dive a bit deeper and connect more authentically with what people actually know. To connect with the shared experience.

A conversation began as I shared that yes, “schizophrenia” is the common psychiatric diagnosis for the reported experience of voice hearing. I’d share that what we are offering is a framework for a person to organize their relationship with the voices. It’s a semi-structured interview and it’s helpful for providers to learn because it helps them better relate and be with a person who is sharing about voice hearing.

I often arrived at the point of a person asking, why would some people want to live with their voices?

What I know to be true is that it isn’t my choice. I can’t force someone to make their voices go away, and working to get rid of someone’s voices purely based on the misguided belief that they shouldn’t be there is harmful.

I’d ask the person I was talking to if they’d ever been forced to stop doing something that was really hard to stop. People would share that they had experiences with things like nail biting, smoking, eating red meat, drinking, and slouching. With all these examples, the person could relate to that voice that says, “You shouldn’t be doing that,” while they kept right on at it.

I’d ask, how did it feel to know you were doing something that you couldn’t stop, and having people around you trying to get you to stop?

The person would share all sorts of expressions along the lines of “terrible.”

I’d ask, “What was your response?”

The person would share responses within the range of “argue, feel bad, yell, cry, feel ashamed, get angry with myself, stop talking to that person…”

I’d ask, “What could that person have done differently?”

I knew I had arrived somewhere when I heard a father and son in the wilderness, 20 miles deep making dinner by the river with headlamps, share that they wished the person had “listened, loved me anyways, asked questions, didn’t yell, didn’t do anything at all, let me be me, still love me.” Their responses were reflected time and again in discussions with others.

I would share that people who hear voices often don’t have anyone to be with them in the experience. It’s not that people around them aren’t trying—it’s that they are scared and can’t listen to simply understand. They have to “fix” the person to make the voices go away. When a person speaks up they are often categorized as “seriously mentally ill.” That’s what “schizophrenia” is considered by our society. That’s a rough label.

I’d ask people, what comes to mind when you think about “schizophrenia”?

The conversation would continue for however long we had. It was about relating to the experience of wanting to be seen, heard, and valued. It matters to people, across contexts, that their experiences are validated and their stories are held as worthy of being heard. It was about working through the fear of not knowing what to do.

Once we acknowledged our shared experience with what it feels like to be rejected, shamed, or ridiculed, we often landed with the recognition that “being with” each other matters more than “fixing.” People don’t need “fixing,” we need love.

And that new program we’re bringing to Connecticut? It’s called the Maastricht Approach Project, and it’s based on the idea that hearing voices is a normal human experience that has a personal meaning in relation with a person’s life history. To learn more about it, or to register for a training, go to: https://www.cthvn.org/map.

Overcoming the Madness in Us All