From YES! Magazine: “Dr. Gabor Maté . . . is at the forefront of conversations about the long-term effects of childhood trauma, inspiring colleagues to transform the way Western society responds to depression, anxiety, addiction, and other symptoms of deep-seated mental and emotional distress. . .

‘Trauma is an overwhelming threat that you don’t know how to deal with,’ he explains. ‘Our job, as human beings, is to learn from our suffering.’

. . . For most of the past decade, I lived and worked as a journalist in Vancouver’s Downtown Eastside, the same neighborhood where Maté got his start working with drug users in the early 1990s. In [the new film] The Wisdom of Trauma, he describes it as ‘North America’s most concentrated and most dramatic area of drug use, where there’s more people injecting and ingesting and inhaling more kinds of substances than anywhere else on the planet.’

. . . Of his patients, Maté reports, ‘They all suffered tremendous torment as children, which also meant that their addictions were extreme. They were quite willing to sacrifice love, life, relationship, health, just for the next hit. They were that desperate to escape from reality, because reality had been so cruel to them.’

. . . ‘Trauma fundamentally means a disconnection from self,’ Maté says. ‘Why do we get disconnected? Because it’s too painful to be ourselves.’

. . . Today, Maté sees dislocation from self in every direction he looks, as well as its symptoms, both mental and physical.

Think video games, social media, unrestrained consumerism, compulsive eating, and the overdose crisis, which killed a record 93,000 people in 2020. People are hurting, he emphasizes. It’s a subject he discusses further in a book scheduled for publication in May 2022, The Myth of Normal: Trauma, Illness, and Healing in a Toxic Culture.

‘Our schools are full of kids with learning difficulties and mental health issues that are trauma-based. But the average teacher never gets a single lecture on trauma,’ he says. ‘The criminal justice system has no understanding or even acquaintance with the concept of trauma. In fact, they often create policies that further deepen people’s trauma.’

. . . The Wisdom of Trauma urges its audiences to ask why, collectively, we respond to trauma the way that we do in schools, hospitals, and the criminal justice system.

‘Childhood trauma is key,’ an unnamed inmate [from the Compassion Prison Project] says. ‘Because once you understand that, you know you were a child, and you didn’t have help. And if it’s about love, then why are we locking you up?'” 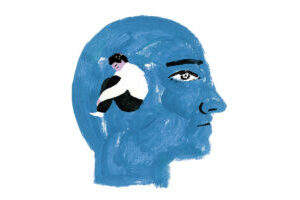