From The Imprint: Youth and Family News: “Legislation signed into law by New York’s governor will bar the arrest of most children younger than 12 years old, a move pushed for years by advocates decrying the state’s overly punitive justice system.

Passed in June and signed into law on Dec. 29 by Democratic Gov. Kathy Hochul, the legislation does not take effect for another year. But its impact is already being celebrated as a victory for juvenile justice reformers. Previously, New York law allowed the arrest of kids as young as 7.

‘No traumatized child, especially those as young as 7 should have to endure the added trauma of the court and juvenile justice systems, especially when we know those experiences lead to worse outcomes,’ said Assemblymember Andrew Hevesi (D), who sponsored the bill along with Sen. Jamaal Bailey (D), in a press statement.

The legislation takes an additional step toward decriminalizing childhood: raising the age required to incarcerate a child in a secure detention facility from the previous 10 to 13 years old. Children suspected of homicide can still be arrested.

Under the new law, police will still respond to 911 calls about children younger than 12 who may have committed crimes. But by the end of 2022, they will no longer be permitted to arrest or fingerprint them. Instead, local community-based agencies will be brought in to provide necessary services, such as mental and behavioral health care…” 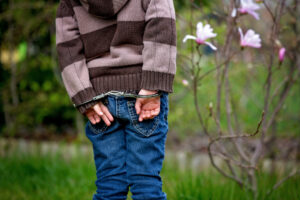