Much has been written about how missing in-person school during the pandemic has damaged kids’ academic progress and emotional wellness. That makes sense, at least for those who were already doing okay or even thriving in that setting. But some of what I am reading lately points to in-school dynamics that also seem inherently damaging to young psyches. Namely, the de-facto criminalization and surveillance of students by the very institutions meant to help them thrive:

These trends can’t help but create an atmosphere of fear, hostility, and distrust among kids while in school. To say nothing of the mental health effects of police presence on campus (“school resource officers”), Florida’s “don’t say gay“ law erasing LGBT youth and their families, and school book bans limiting the history and ideas to which kids can be exposed. We’ve written here about how to deal with school refusal, but school refusal may make sense if it is hazardous to the child’s mental health and safety. (A few hours after I wrote this post, news broke about the mass shooting at a grammar school in Uvalde, Texas, amplifying the sense of risk around attending in-person school.) 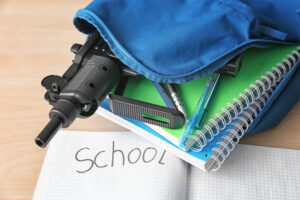 So what can be done? While gun violence is a complex issue, emotionally and academically damaging policies that criminalize and surveil youth are something schools can address right now.

Fortunately for students in Illinois, not long after the Pro Publica/Chicago Tribune article appeared, they published a new story, which begins: “ Illinois’ top financial official has banned local governments from using a state program to collect debt from students who have been ticketed for truancy, eliminating a burden for families struggling to pay steep fines. A number of school districts around the state, meanwhile, have begun to scale back and reevaluate when to involve law enforcement in student discipline.” Power of the press!

Are you noticing these or other kinds of stress- and even trauma-inducing policies or events at your children’s school? What about parent- or youth-generated pushback and positive solutions? We’d like to know about them: Write me at [email protected].