Anti-Black police brutality is a problem older than America itself, but it has intensified since 2020. In response, many psychologists have investigated the biases of heinous police officers, thus viewing the issue as individualistic. This approach—even in the likely scenario that these police officers do hold racist, implicit biases—disregards the structural racism that allows any police officer to use law enforcement as a guise for terrorizing, torturing, and/or killing Black people.

A team of psychologists and researchers at The George Washington University have critically approached Anti-Black police brutality, as well as the mainstream psychological response to it, from a perspective that identifies police brutality as a system that intentionally separates Whiteness and Blackness through abuse and harm.

“The central posit of critical race theory, a framework from critical legal studies, is that racism is not anomalous or aberrant, but instead a routine, ordinary, and seemingly fixed fact of everyday life for Black and other people of color in the United States (Bell, 1980). From a critical race theory perspective, the routine adverse encounters that Black people have with police and other law enforcement officers are archetypes of structural racism and what it means to be Black in the United States. Critical race theory highlights that ordinariness and interest convergence bolster White supremacy. Ordinariness refers to the commonness of racism such that police brutality against Black people has to be lethal, videotaped, and go viral to spur media or public attention, research, political remedy, and/or intervention. Interest convergence asserts that White people are motivated to support initiatives that would improve Black people’s well-being and interests only to the extent that they benefit White people.” 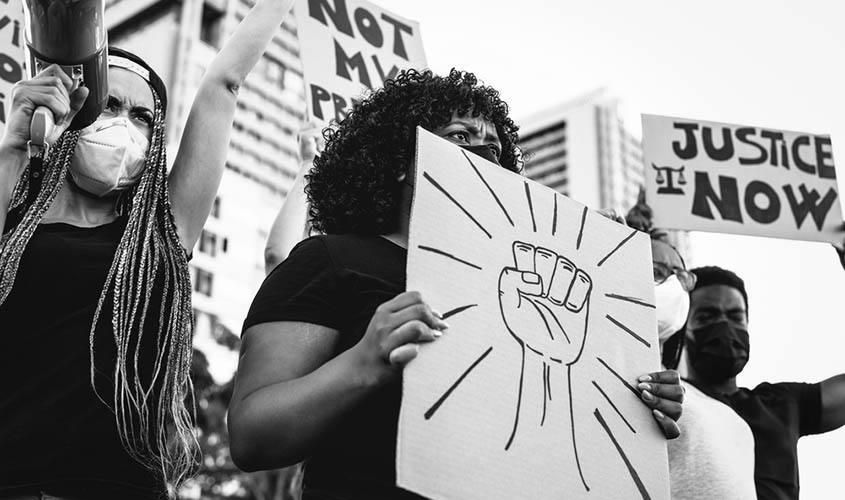 These terms in mind, the authors acknowledge that there is a massive gap in data relating to police brutality in Black communities. This is because the government does not seek to collect this data, and because police departments resist sharing such information. In turn, data must come from independent sources such as Mapping Police Violence. Unfortunately, data about nonlethal police brutality is even harder to acquire; such interactions with police are more pervasive, and therefore harder to keep track of, but also have become so painfully routine for Black people that verbal abuse and “Driving While Black” stops have been made an ordinary part of life for Black people in America. Still, the authors stress how intersectionality comes into play for police brutality.

The authors found from multiple surveys that “Black and Latino people with darker skin were more likely than their lighter skinned counterparts to be stopped and arrested by police” and that “evidence from recent research documents that lesbian, gay, bisexual, and queer (LGBQ) adults reported more contact with police over a 1-year period compared with their heterosexual counterparts; LGBQ people were six times more likely to have police stop them in public (6% vs. 1%).”

Ahmaud Arbery’s death is an example of Afro-Pessimism being validated by the actions of police. When police arrived and found Arbery dying to a gunshot wound, they did not help him, and instead believed the testimonies of the White assailants who had shot him for looking similar to a burglary suspect. Arbery was simply out for a jog when he was shot and killed—this is why the authors view policing as an extension of Whiteness and compare modern day police brutality to slave patrols from over 400 years ago. In other words, in order to uphold a “civil” White society, Black people must be policed. The authors cite Wilderson’s 2016 review of a 1914 dissertation by H.M. Henry:

“Henry’s observation that colonial legislation in 1686 assigned to White people the right to “apprehend, properly chastise, and send home [sic] any slave who might be found off his [or her] master’s plantation without a ticket.” This voluntary assignation proved ineffective, and so by 1690 White people who failed to perform this police duty were subject to a fine of 40 shillings. In essence, to be White, was to be the police. This racialization repeated itself for many European immigrants to the United States who were stereotyped as criminals or people in need of law and order. In response, Boston established the first official police force in 1838; by the 1880s, virtually every major U.S. city had a police force (Waxman, 2017).”

Black people in America have been made into a class of people whom, by law (and therefore systemically), are policed, whereas Whiteness could be viewed as the immunity to or freedom from policing. The authors emphasize that police brutality is not just a physical fear for Black people, but also a constant mental and emotional stress. It’s well-known that victims of police violence are at a greater risk for suffering psychotic symptoms, but simultaneously, Black people suffer in the world of health care where their accounts of their own ailments are more likely to be dismissed.

As a response, the authors developed the Anti-Black Police Brutality Continuum, a scale that identifies and categorizes different forms of police abuse that is informed by critical race theory, Afro-Pessimism, and intersectionality. The continuum serves to recognize every type of injustice that police inflict upon Black people. It also acts as a steppingstone for further psychological research into each type of abuse, from verbal abuse such as usage of slurs and intentional misgendering of transgender people to physical abuse such as lethal use of firearms or attempts at strangulation via submission holds.

The Anti-Black Police Brutality Continuum also responds to the American Psychological Association’s (APA) snail’s pace in terms of progress. The authors cite a criticism of the APA from over two decades ago that calls for mainstream psychology to view racism not as a trait belonging to individual police officers (i.e. giving substance to the “bad apples” argument) but as an element of the police force as a structure. The change that this criticism calls for is still being advocated for today.

While the authors explain the cause for Afro-Pessimism in an age of reignited White supremacy, they find glimmers of hope in grassroots efforts such as Black Lives Matters protests that have given attention to the testimonies of Black people.