From The New Republic: “The danger of trading out law enforcement for social workers, or trying to rein in police squads by adding soft-eyed chaperones, isn’t that the unarmed helpers would be ineffective or that crises sometimes require blunt force. The concern is that if you measure in terms of the power to coerce, surveil, and inflict lasting harm, social workers are, thanks to very nature of the job, cops by another name—‘key participants,’ said Dorothy Roberts, a sociologist and law professor at the University of Pennsylvania, ‘in a system that is designed to control and punish marginalized communities.’

JMacForFamilies is an organization devoted to fighting the child welfare system—or ‘family regulation’ system, as its critics often call it. Jasmine Wali, the director of advocacy at JMacForFamilies, explained, ‘Social workers are still going to put people in jail if they’re in crisis,’ if that crisis isn’t easy to handle, and they can’t ‘just talk the person down.’ In homeless shelters, staff members trained in social work call the police ‘on everything,’ just as they do in group homes for children in the foster care system ‘if a child misses curfew, or a child is throwing things or having a tantrum.’ Social workers administer urinalyses or other drug tests, which can result in people losing eligibility for social services. In the family court system, so much of what they do ‘is like parole work,’ said another social worker I spoke to. Between 2000 and 2020, among 54 cases of people arrested for self-managing or helping self-manage an abortion, 6 percent were reported to the police by social workers, according to a report by If/When/How.

‘Oh, so you want to be put in jail nicely?’ said Kamaria Excell, who works with ­JMacForFamilies. ‘Cuz that’s all that’s going to happen.… I’m not gonna show up necessarily with a gun.… I’m gonna have my sweater and my notebook,’ but ‘you’re going to jail.’ Backed against a wall—or just following the protocols of the agency or nonprofit that employs them—the social worker calls the police.” 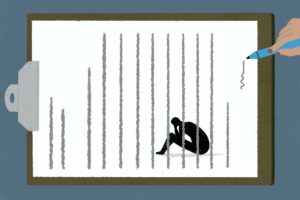