According to a meta-analysis of over 73,000 subjects in the drug trials submitted by drug developers to the FDA, 15% of subjects who received an antidepressant appeared to experience a clinically significant decrease in the standard depression score used in research studies. 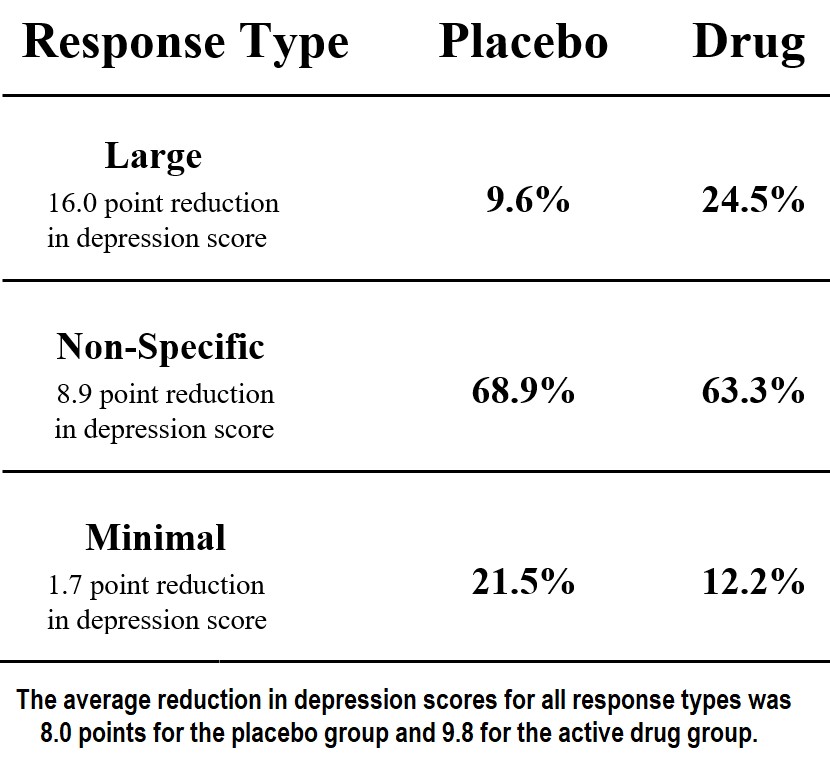 The mechanism of additional relief over the placebo effect for those folks with a large decrease in depression scores may have been the reduction in their reactivity to their worries and concerns and/or the effect of a psychoactive placebo. 15% of those in the drug trials may have benefited from drug induced “reactivity reduction” and/or the added impact of a psychoactive placebo that doubled the average decrease in depression scores (eight points) produced by placebos alone.

As we can see from the chart, half of the large decrease in depression score (about eight points, which would not be considered a definite clinical improvement) was seen in the average subject who took a placebo.  So, for those who experienced a “large response,” their response was double the average placebo effect.  Even though the authors noted that half of that 16-point reduction was present in the average placebo response, in practice any response seen after administering a drug tends to be attributed to the drug.  This misattribution of the total impact to the drug tends to occur despite the fact that “the power of suggestion” (the ordinary placebo alone) produces the same “large response” 40% as often as the drug.  There were no comparisons to a psychoactive placebo, which we can be pretty sure would produce the larger benefit occasionally seen with the drug even more frequently.

Consider that, from the prescriber’s perspective, 25% of patients will show clear improvement.  The prescriber’s experience, however, provides no information that would indicate that 10% would have had the same improvement with a placebo.  Furthermore, another 63%, on average, will appear to have a non-specific (meaning that it is somewhat positive but of unclear clinical significance) reduction in their depression scores.  In clinical practice, those patients would likely appear to be unchanged or even slightly improved, though again the prescriber would have no way of knowing that an even larger group of patients (69%) would have had the same response had they prescribed a placebo.