From The Seattle Times: “On Christmas Eve 2016, Karlene Petitt, an international long-haul pilot for Delta Air Lines, received a devastating letter that threatened to end her career.

She had been grounded since March pending an evaluation by a company-assigned doctor. The letter informed her of his diagnosis: She was mentally unfit for duty and would not be permitted to fly again.

Petitt had then been flying commercial jets for 35 years. She’d raised three children, earned a doctorate and two master’s degrees and wrote a series of books, all while performing perfectly as a pilot.

In early November of the previous year, she had sent emails to her superiors criticizing Delta’s safety culture, initiating a series of interactions with them about safety issues.

Just six days later, captain Jim Graham, then Delta’s vice president of flight operations, in an email to a pilot manager under him, indicated clearly his intention to put a stop to Petitt’s critique and to do so using a Kafkaesque process called a ‘Section 15,’ which would label her too mentally unstable to be a pilot.

‘We should consider whether a Section 15 is appropriate,’ Graham wrote. ‘If she cannot embrace and understand the reasons behind our actions, it stands to reason she might not be able to make appropriate decisions for the safe operation of a flight.’

Hired by Delta for $74,000, Dr. David Altman produced the necessary diagnosis: In 2016, he evaluated Petitt as having bipolar disorder.

Altman later testified that his diagnosis was driven in part by Petitt’s accomplishments. The books, the degrees, the piloting job, all while raising kids, it was ‘well beyond what any woman I’ve ever met could do’ — and therefore suggestive that she was manic.

This extraordinary process brought the full weight of a big corporation to bear on Petitt. She was grounded. Her career looked over.

Yet she fought back. She resisted. And she won.” 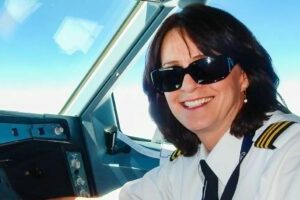