The following article is based on hundreds of cases seen in the layperson psychiatric drug withdrawal community. But, don’t take my word for it. You can find hundreds of these stories on online forums such as Surviving Antidepressants, Benzo Buddies, or dozens of Facebook groups such as Cymbalta Hurts Worse, EFFEXOR (Venlafaxine) Tapering, Discontinuation Syndrome and Protracted W/D, or Lexapro: Support, Withdrawal, Recovery. Psychiatry has the opportunity to learn from our online communities to better care for the many people who wish to stop taking psychiatric drugs.

We are conditioned to believe that the medical system has all the answers to our mental and physical health concerns. But for people taking psychiatric drugs and who want to come off, traditional systems may unnecessarily harm them further. Patients who are prescribed antidepressants, antipsychotics, benzodiazepines, mood stabilizers, and/or z-drugs often seek help from detox facilities and hospitals with psychiatric wards when their regular providers aren’t knowledgeable enough to assist. But these places are not qualified to help people who want to deprescribe.

Like the thousands of formerly trusting consumers in the online forums, the pattern seen in online communities goes a little something like this: A person goes through something hard—a bad job, a divorce, the death of a loved one, a trauma, an inability to sleep, or an inability to handle major stress happening in their lives. They make an appointment with their family doctor or, less often, a psychiatrist. The doctor prescribes something for the symptoms, usually an antidepressant or anti-anxiety drug. In the following months, many will start to feel side effects that may mimic mental or physical illnesses. Their doctor will fail to recognize the symptoms as possibly being caused by the drugs they previously prescribed. When the patient reports these new or worsening symptoms, the prescriber will either raise the dose of the current medication, switch the patient to a different medication (in the same class of drugs or in another class), or add more medications (prescription cascade). 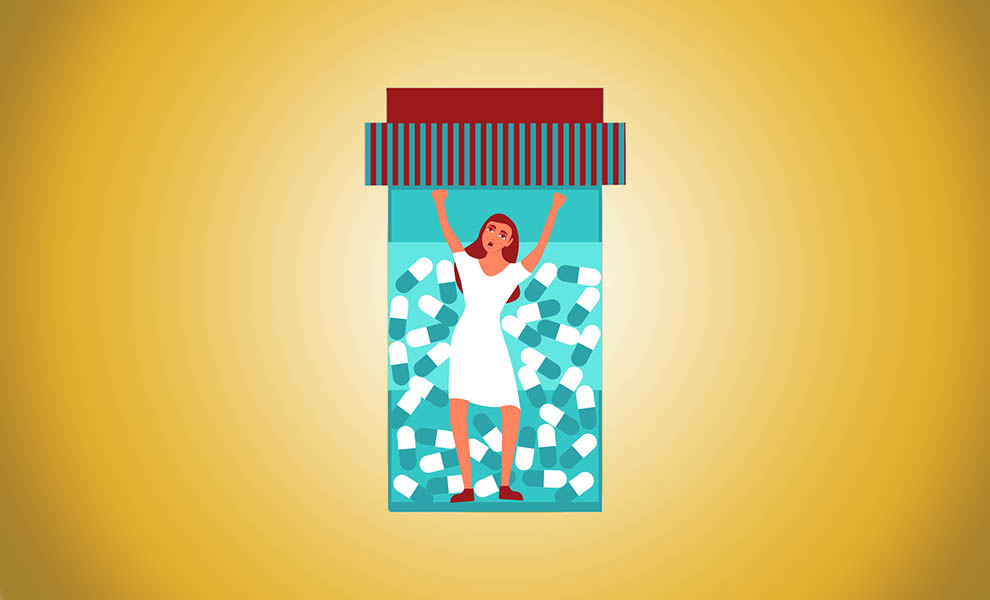 Many months will pass. The patient’s medication dosages have been increased, they have been put on or taken off multiple medications, and they may suddenly find themselves on three to 10 drugs at the same time. Antipsychotics are often used for sleep (an off-label use) if benzos or z-drugs aren’t being prescribed.

At some point, the patient feels awful and doesn’t know what’s happening to them. They may have symptoms that are so severe that they feel like they are “dying” or that their nervous systems are “completely fried.” They don’t know if the adverse effects are due to their original condition, from the cocktail of medications they are now taking, or from some new, emerging “illness.”

This is when their healthcare utilization often increases. Patients will often go on a wild goose chase searching for the cause of their awful symptoms. The patient is subjected to MRIs, CAT scans of their brain or other areas of their bodies, blood tests, and visits to multiple specialists like rheumatologists and neurologists. All the while, the patient continues taking the drug(s) that have been causing their problems.

Eventually, the patient gives up the wild goose chase of seeing doctors, of trying new meds and stopping others, and subjecting themselves to more and more testing. They feel scared and hopeless, but their intuition or just how terrible they feel will tell them that they need to get off the cocktail of medication they are on, ASAP. After anything medically serious has been ruled out, the patient may finally realize that the medication they are prescribed is not working and/or is making them feel worse.

Detox facilities are not trained to deprescribe psychiatric drugs. Through the years, patients have figured out that hyperbolic tapering may be the best method to reduce the severity and length of withdrawal symptoms and to ensure the best chance at a successful taper. This process can take months, and in some cases, years, for a patient in a polypharmacy situation. Hyperbolic tapering is not appropriate for residential detox programs where twelve step programs, addiction language, and fast detoxes are standard of care. Insurance companies would not pay for the length of stay or appropriate support needed for a patient coming off psychiatric drugs slowly. Successful tapers are best done on an outpatient basis where the patient is in control of the rate and method of taper with support from a knowledgeable prescriber. Peer support from others who have gone through the process is also needed (and available online 24/7; see the forums listed at the top of this article).

Oftentimes, detox facilities reassure patients that they are “the most knowledgeable in the field” or “specialists in benzo withdrawal.” Because training in deprescribing psychiatric drugs is so poor, most facilities approach it like opioid or alcohol detox where patients are given “supportive medication” (like clonidine, valium, or beta blockers) and rather roughly torn off their drugs, without much regard for withdrawal symptoms. The patient might do okay for the first few days, until eventually, all hell breaks loose. Many will suffer the severe central nervous system destabilization (heart palpitations, sensory hypersensitivity, suicidal thoughts or akathisia) and may have to sign out of the facility against medical advice (AMA). This means they will not receive any prescriptions for medications they were given while at the facility. In many cases, these patients receive large hospital bills and leave with more prescriptions than what they were admitted on.

Patients coping with a polypharmacy situation who turn to their psychiatrists, general practitioners, therapists, or hospital emergency wards may be in trouble, too. Whether the patient is suicidal or their doctor suggests psychiatric wards as a good place to “stabilize,” doctors there often take patients off drugs abruptly and/or will start new medications, increasing their polypharmacy problem. For example, a person may be taken off one of their antidepressants and a new one started. A medication for sleep may be replaced by an antipsychotic (whether or not the person is psychotic—usually they are not), or an anti-anxiety medication will be stopped and replaced with an antidepressant or a mood stabilizer. Sometimes, new diagnoses are given as well. Then, the patient is released within a few days and sent home after the doctor believes the patient to be stable.

Usually, a few days is not enough time to know whether a person is truly “stable,” as evidenced by the prevailing guidance that it can take 4-6 weeks for a drug to start “working.” But, this is one of the reasons doctors say they have “never seen people have a hard time coming off.” They aren’t asking the right questions while patients are inpatient, there is no follow-up from psych wards back to the community, and psychiatric drug withdrawal symptoms are misdiagnosed as “relapse” or a new illness when they are seen. Further, the mental health industry does not track patients long-term to see whether their interventions are truly helpful or not. Once discharged, patients are back home left to deal with their polypharmacy nightmares all on their own and they will often turn to our online communities for help. Patients find support forums usually from a simple Google search like “benzo withdrawal” or “fluoxetine withdrawal.”

In the online communities, patients find out that their strange physical and mental symptoms may be due to the medications they are taking and will see them spelled out in full detail, by other patients in the same situation as themselves. They are offered ways to cope with their symptoms, they find hope, and an exit plan off the drugs. They see success stories of patients healing and restoring their health, usually without the support of any medical professionals.

Psychiatry is at risk of losing any credibility they have left by continuing to ignore the gaps in support for people who choose to deprescribe because of iatrogenic harm or otherwise. Perhaps some prescribers are not aware of their patients’ paths through the medical system, or detox and psych wards. A vast majority of practitioners have no knowledge or training about psychiatric drug withdrawal and protracted withdrawal syndromes. Patients are too afraid to go back to the providers who have caused them harm, are gaslighted when they do, and are afraid to talk about it for fear of losing their prescriptions they need to taper safely at their own speed. Are these the outcomes that psychiatry wants? With no movement towards safe deprescribing happening at any level of the mental health industry, the knowledge about how to taper successfully, and how to cope with severe symptoms, lies in the layperson withdrawal community.

Is abandoning responsibility to the layperson withdrawal community the best strategy? This strategy does allow patients to keep control of their tapers, at their own speeds, using the collective wisdom passed on from patients before them. They cope with the severe symptoms quietly in their own ways, in the safety of their homes without the threat of further hospitalization or forced medication. This prevents further polypharmacy by psych wards and abrupt cessation in detox facilities. But, abandoning the responsibility for deprescribing to the layperson withdrawal community allows the harm to continue in an echo chamber. Every day, the online support forums are seeing more patients coming for assistance in withdrawing from psychiatric drugs. In 2021, the Facebook groups reported a 5.24% growth in members joining drug-specific groups in search of sound advice for deprescribing. Lexapro, Seroquel, and Lithium withdrawal support groups saw a 10-15% increase in new members.

The American Psychiatric Association has long ignored deprescribing as a legitimate intervention when patients are not doing well on their current medications. There must be more continuing medical education (CME) training that includes differential diagnosis of adverse drug effects versus psychiatric disorders, prevention and deprescribing of harmful polypharmacy, safer prescribing and deprescribing practices, shared decision making, informed consent, and patient-directed hyperbolic tapers. Outpatient deprescribing clinics must be funded and research conducted. Medical school curricula must contain best practices (as learned from our communities) for safe deprescribing. These paradigm changes are long overdue.