A summarized collection and critical assessment of the ongoing research that exposes the sickening effects of capitalism on mental health was recently published as a chapter in the Oxford Textbook of Social Psychiatry by epidemiologists Jerzy Eisenberg-Guyot and Seth Prins.

Psychiatry and social sciences’ focus on individual factors has failed to account for the role of structures and systems – such as capitalism – in developing mental illness and the disparities in psychological forms of suffering.

“What explains these trends and inequities? While this question has been a primary concern of quantitative social science, the resulting answers have not always engaged directly with capitalism—a socio-economic system that not only structures societal distributions of health-affecting resources and power but also modulates our experiences of reality and the production of knowledge within it. Instead, mental health researchers have focused on the roles of individual-level factors like ‘risk behaviors’ or socio-economic status. Moreover, capitalism’s ubiquity makes it difficult to isolate pathways through which it affects any single outcome like mental health.” 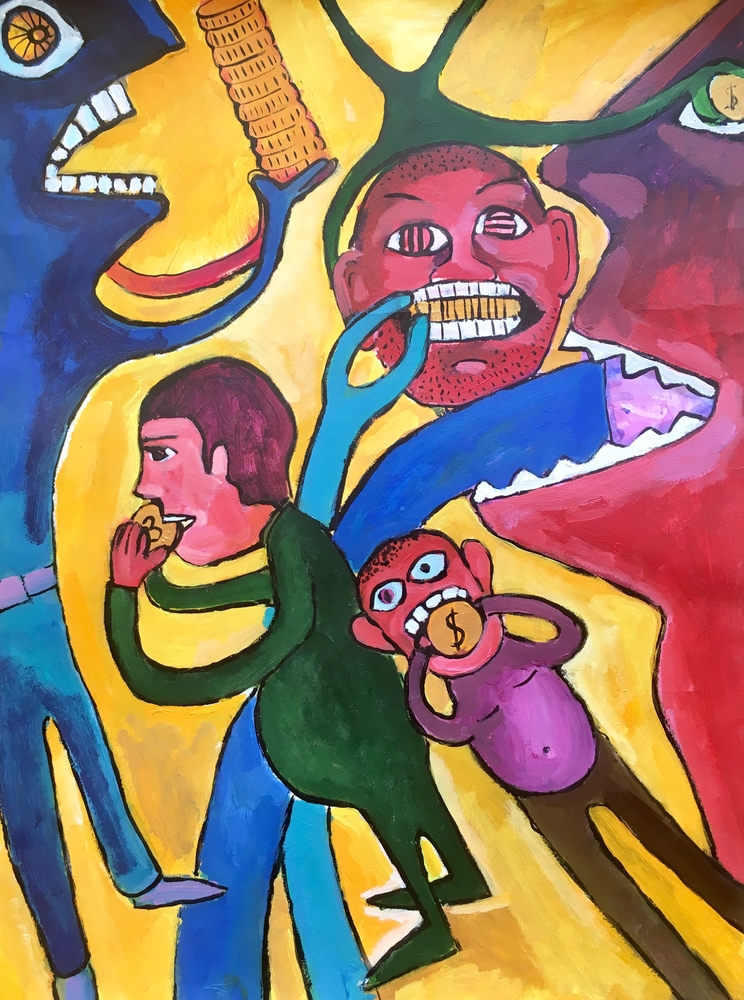 To move away from this individualizing trend, the authors review the most recent and historical literature and empirical research that illustrate the influence of capitalism on mental health in this chapter.

For example, studies have shown that people who adhere to capitalist values are more likely to experience loneliness and decreased psychological well-being. Capitalism has also been previously conceptualized as a social determinant of health.

Eisenberg-Guyot and Prins agree, as they “recognize that all research on the social determinants of mental illness implicates capitalism.” In addition, however, they draw an explicit connection between capitalism and racism, colonialism, and the patriarchy, making a visible connection between capitalism and the suffering of women, people of color, the colonized, and other minoritized groups.

Original Studies on the Relationship between Capitalism and Mental Health

Using official data and observations, Friedrich Engels developed one of the first epidemiological studies ever and included information about physical and mental health in Britain. He found a connection between the poor work conditions of early industrialization and the illness and premature deaths of workers. Engels also found that the capitalist promotion of competition led to increased loneliness, indifferences, and isolation. Moreover, repetitive tasks led to a lack of creativity and autonomy and increased boredom. Finally, he described how the physical illnesses developed at work led to irritability, hopelessness, and depression.

Through similar methods, Karl Marx identified how the industrialist material conditions and dynamics influenced the mental and emotional life of the working class. By minimizing the tasks of the workers, the capitalist “increases efficiency and productivity (and thus profit) but degrades and deskills labor.” This reduced the creative capacity of the worker and generated isolation, powerlessness, boredom, anxiety, and a lack of purpose. The time spent working also took away from the time and energy necessary for the worker to engage in their social life and more fulfilling activities.

Marx and Engels also identified how women and children worked under worse conditions than adult men, were paid less, and had added responsibilities such as domestic work, leading to a disparity in “exhaustion, pulmonary disease, injuries, poisonings” and lower life expectancies (or infanticide).

While class difference was the primary focus of Marx’s and Engels’ epidemiological analyses, Marx briefly acknowledged the role of colonialism and slavery in creating and perpetuating capitalism and how they generated mass death and suffering among the colonized groups.

Marx didn’t generate a theory around sexism and racism, but the authors  explain that “feminist and black radical theorists have filled these gaps, arguing that capitalism depends on racism and sexism to maximize profits through hyper-exploitation, colonialism, imperialism, and patriarchy.”

“They argue that capitalism has been racialized and gendered since its inception and that it has used such hierarchies to expand – by appropriating resources and Labour from Africa, the Americas, other parts of the Global South, and elsewhere, and by creating and exploiting gender divisions of labor.”

Many researchers were influenced by Marx’s theory of alienation which states that under capitalism, workers are alienated – or separated – from the fruit of their labor (as the capitalist takes both what workers create and most of the profit that is made from their work), from themselves (their needs and desires) and from others (such as other workers, friends, family, and community).

Social Psychologist, Seeman, expanded Marx’s work and identified various dimensions of alienation, such as powerlessness (belief in the inability to achieve one’s goals), meaninglessness (lack of confidence in predicting the outcomes of one’s actions), normlessness (having to engage in socially unacceptable behavior to achieve one’s goals), and isolation (lack of connection with others). In addition, he and other researchers found that alienation was associated with depression, anxiety, poor self-esteem, hopelessness, and self-perceived physical health.

The authors found similarities between these findings and other theories. For example, they mention how psychoanalytic theorists have also believed that the dehumanization of workers under capitalism hinders their creativity, social connections, and the ability to satisfy their needs and desires. Eisenberg-Guyot and Prins also see the compatibility between these ideas and the diathesis-stress model (which argues that the interaction between socially-patterned experiences and stressful life experiences, alongside one’s history, contribute to the development of mental illness) as the structured life of the working class alongside their alienation and personal histories influence the development of mental illness.

Occupational research has also found a relationship between alienation and mental health. Karasek developed the demand/control or job strain model, which studies two aspects of work. The first is job demands or the laboriousness necessary to go about one’s work and the stress that arises from other tasks and interpersonal conflict at work). The second is job control, the employee’s ability to change the work environment or how they perform their tasks.

According to this line of research, people whose jobs had higher demand and lower control were more likely to report more anxiety, depression, exhaustion, distress, and stress-related physical health issues. However, Karasek fails to acknowledge the power dynamics that are played out due to class relations and the capitalist structure. Job strain itself isn’t the cause of health disparities between classes but the result of inequality.

Due to changing social structures and dynamics, sociologists and psychologists left behind the dichotomy of capitalist/worker and began using a model that fit the newly emerging hierarchies within the workplace. This included the capitalist, the manager, the supervisor, and the worker. Managers and supervisors are characterized by the contradiction of their class location as they do not own the means of production but overlook the laborer’s work. Using the theory of class contradiction, researchers found that low-level supervisors had less control over the workplace policies, environment, and decision-making processes. Being “dominated and exploited by capitalists and antagonized by subordinates (the contradictory class location hypothesis),” these low-level supervisors were at higher risk of developing mental illness, reporting higher levels of depression, anxiety, and alcohol use disorder when compared to both higher-level managers and workers.

Other studies show that capitalists and managers report better psychological well-being than workers and supervisors. Still, the relationship between class and health was stronger amongst men compared to women. They hypothesize that this difference might be attributed to the disparities in heterosexual couples’ division of domestic labor, among other reasons. Additionally, recent research has found that the petit bourgeoisie (or entrepreneurs, small business owners, professionals, etc.) were found to be at higher risk of mental illness than the previously mentioned classes as they are often competing with capitalists without having the same number of resources and often end up becoming part of the working class.

While most research in these areas used self-reports, which measure the person’s perception of job strain, other researchers have used different kinds of data to study workplace social relations and their influence on mental health. For example, in 2015, Muntaner and colleagues measured organizational-level exploitation using employers’ for-profit or not-for-profit status and measured managerial domination in the frequency of labor-relations violations. They found that US nursing assistants exposed to more organizational-level exploitation and managerial dominance were at higher risk of experiencing depression.

Studies using similar, more objective measures found that the percentage of income workers who were not paid in accordance with their labor increased the workers’ odds of developing mental illness. Moreover, employees whose work had become more automatized had more odds of engaging in binge drinking than workers with more authority and autonomy over their work.

Psychiatric epidemiology has often failed to study the interconnected structural and systemic factors (e.g., colonialism, racism, colonialism, sexism, misogyny and patriarchy, LGBTQphobias, etc.) that influence mental health. Future studies should aim to fill the gaps in research about the connection between capitalism and the objective conditions lived by people of color and people of the Global South.