From The Washington Post: “Confined to a room at Yale New Haven Psychiatric Hospital, S. asked her nurses and doctors with growing fear, ‘Do you have to tell them?’

Yes, they replied. Because she was a student, hospital staffers said, they needed to let college officials know, she recalled. They gave her consent papers to sign for the release of her medical information. She remembers how vulnerable she felt in her thin hospital clothes as she signed the release.

. . . Yale officials quickly set up a Zoom call with S. on a hospital laptop in a small, bare room. On the screen, she said, was Paul Hoffman, the psychologist in charge of student mental health at Yale.

She told him about the rape she’d experienced — but had never reported because she didn’t want her parents to know — and how it had sent her spiraling into suicidal thoughts.

He nodded and took notes. A few days later, he arranged a second Zoom call, with her and her parents.

‘We’re going to recommend you take a medical withdrawal,’ he told her, she said.

‘Do I have to?’ S. remembers asking him.

. . . For S., leaving Yale meant losing her friends and mentors — people who had kept her afloat during her depression. It meant losing her routine, her lab research, her four-year plan to get into medical school. Losing all the things that gave her purpose, identity and support when she needed them most.

S. had followed the campus debate in the wake of Shaw-Rosenbaum’s suicide. She knew Yale could force her to withdraw if she didn’t leave on her own.

As soon as the Zoom call with Hoffman ended, hospital staffers handed her the cellphone they’d taken when she arrived. She began typing out the email Hoffman had asked her to send. ‘Good afternoon,’ it read. ‘I am requesting a medical withdrawal.’

In coming months, S. would look back to that moment with anger and regret. It wasn’t what she imagined when she was admitted to Yale, one of the country’s most prestigious universities. She recalled how her family screamed for joy. How special she felt when Yale found out Brown and Northwestern had also accepted her and raised her financial aid to match what they would provide.

‘They make you feel like you’re the best of the best, like this bright and shiny thing,’ she said. ‘But as soon as something’s wrong, they want nothing to do with you.’

It had been difficult to get into Yale. She would soon learn how daunting it was for those exiled from the university to return.

. . . In 2018, researchers at the Ruderman Foundation, which advocates for the disabled, assessed the mental health withdrawal policies at all eight Ivy League schools. No university received a grade above D+, and Yale received an F.

. . . ‘It’s hard to explain what’s so dehumanizing about it that it’s haunted me for two decades,’ said Alicia Floyd, who withdrew after a suicide attempt in 2000 and now works as a doctor. ‘It’s the betrayal you feel, the violation. Realizing how unimportant you are to this institution that you had such high hopes for. The trauma of how they treated me has outlasted many other issues I had.'” 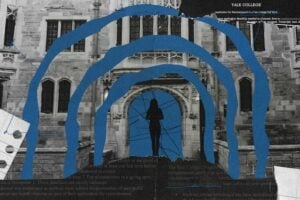