Last week, Robert Gibbons published a paper in the Archives of General Psychiatry in which he claimed, based on his “reanalysis” of the data from studies of fluoxetine in youth, that “treatment with fluoxetine was not found to be related to suicide risk when compared with placebo.” This led Irish psychiatrist David Healy, who has investigated this issue at length, to write a blog in which he categorized the various statistical tricks that Gibbons had employed to come to his conclusion, and he noted that the British Medical Journal called a 2007 paper by Gibbons on this topic “astonishing,” “misleading,” and “reckless.”

But in Healy’s blog, there was a reference to new data from the NIMH’s Treatment for Adolescents with Depression Study (TADS), and therein lies a much more important story.

In his blog, Healy published a table on suicidal events from the NIMH’s TADS study of antidepressants in youth, which had been prepared by a Swedish correspondent, Göran Högberg. That table put the suicidal risk associated with fluoxetine in a different light than had been presented in the published articles about the TADS study, and I thus asked Högberg where he had obtained this “updated data.” He pointed me to a 2009 article authored by Benedetto Vitiello, titled “Suicidal Events in the Treatment for Adolescents with Depression Study (TADS),” which was published in the Journal of Clinical Psychiatry. In particular, Högberg pointed me to a table titled “Timing of First Suicidal Event.”  And there, hidden in plain sight,  was the real suicide data from the TADS study.

The Background to the TADS Study

When the TADS results were first published, the practice of prescribing SSRIs to children was taking an evidence-based beating. First, in 2004 the FDA held a hearing on the increased risk of suicide with SSRIs in children, which led to a black box warning. In addition, the FDA’s Thomas Laughren reported at that meeting that these drugs—with the exception of fluoxetine—didn’t work in children either. Twelve of the 15 pediatric trials that had been conducted prior to that date had failed, as the SSRI had not bested placebo. The FDA, in fact, had rejected the application of six manufacturers seeking approval to sell their SSRIs to children.

Fluoxetine (Prozac) was the one SSRI that the FDA had approved for pediatric use. Two of the three positive studies reviewed by Laughren had come from trials of this drug. But as many critics pointed out, there was no reason to think that fluoxetine was any more effective in children than the other SSRIs. The percentage of children who responded to Prozac in the two positive trials was similar to the response rate in the twelve failed trials; Eli Lilly had simply been better at using biased trial designs to knock down the placebo response rate and thus make it appear that its drug worked. Indeed, Australian investigators who reviewed the trial data wrote in the British Medical Journal that the evidence for fluoxetine’s efficacy in children “is not convincing.” As such, they concluded, “recommending [any antidepressant] as a treatment option, let alone as first line treatment, would be inappropriate.”

The editors at Lancet came to a similar conclusion at that time: The truth, they wrote, was that SSRI antidepressants “were both ineffective and harmful in children.”

Such was the embattled status of SSRIs as a treatment for pediatric depression when the TADS investigators, in 2004, first announced their efficacy results. In the study, 439 youth, ages 12 to 17 years old, were randomized either to placebo, fluoxetine, cognitive behavior therapy (CBT), or a combination of CBT plus fluoxetine. At the end of 12 weeks, the response rate was highest for the combination group (71%), and lowest for the placebo group (35%). Although industry-funded trials hadn’t provided good evidence for the use of SSRIs in youth, this NIMH-funded study had done so, at least for fluoxetine.

At that time, several academic critics, including Jon Jureidini from Australia, noted that the two cognitive therapy groups in the TADS study were unblinded, and that in the only blinded comparison from the study, between fluoxetine and placebo, fluoxetine did not provide a statistically significant advantage over placebo on the primary endpoint, the children’s rating scale. As such, Jureidini concluded that the TADS studied showed “that fluoxetine, like all other antidepressants, is of doubtful clinical importance for children.” But this criticism was mostly ignored, and psychiatry now had its efficacy data for an SSRI in youth.

However, a safety problem did show up in the TADS study. There was an increased risk of suicidal events seen in the fluoxetine group compared to placebo, and the question of that risk hovered for a while over the trial, until it was basically dismissed in subsequent reports. However, with the publication of Vitiello’s 2009 report, and Göran Högberg’s alert reading of that study, we can see how the NIMH-funded investigators  finessed this risk, keeping its true scope hidden from the public.

The Suicide Data, Step by Step

The 12-Week Results: Then and Now

In 2006, Graham Emslie and the other TADS’ investigators published the 12-week “safety results” in the Journal of the American Academy of Child and Adolescent Psychiatry. They reported that in the 109 youth treated with fluoxetine, there were 10 suicidal events (9.2%), which was defined as either suicidal ideation or suicidal behavior/attempts. There were three such events in the 112 youth given a placebo (2.7%.) Two in the fluoxetine group attempted suicide, versus none in the placebo group.

Although this data clearly raised a concern, the investigators wrote that suicidal ideation rates had improved in all four groups during the trial, compared to baseline rates, and that nobody in the trial had actually committed suicide. Thus, the excess risk in the fluoxetine group was not seen as unduly alarming.

In Vitiello’s 2009 paper, we find slightly different data. In the 12-week study, there had actually been 12 suicidal events—rather than 10—in the 109 fluoxetine patients. There were three attempted suicides in the fluoxetine group, rather than two. Moreover, in the group of 112 placebo patients, there were 8 that were put on fluoxetine during the 12 weeks, and 2 of these 8 then suffered a suicidal event. But these 2 suicidal events in fluoxetine-treated patients were not included in Emslie’s 2006 report.

The 36-Week Results: The Initial Report by the TADS Team

After the initial 12-week period, the study was unblinded (in the placebo and fluoxetine-only arms), and those in the placebo group who hadn’t done well were offered the choice of choosing one of the three active treatments—fluoxetine, CBT, or a combination of the two—during the 24-week followup.

The researchers did not break down the suicidal events into their two components (suicidal ideation and suicidal attempts), and thus there is no data, in this article, on the number of youth in the study who attempted suicide. And while suicidal events were notably higher in the fluoxetine-only group, the researchers explained it away. They reasoned that CBT likely mitigated suicidal thoughts (as opposed to fluoxetine triggering such thoughts), and thus they concluded in the abstract, “adding CBT to medication enhances the safety of the medication.” (Emphasis added.)

Yet, once again, in Vitiello’s 2009 paper, we find additional suicidal data in the chart titled “Timing of First Suicidal Event,” and when it is included in the data analysis, we see that the risk of suicide, during the followup phase, was found only in fluoxetine-exposed patients.  There were no suicidal events in the CBT-alone group who didn’t take fluoxetine during this period. However,  some of the patients in the CBT-alone group were in fact exposed to fluoxetine during the 12-week-to-36-week period (we don’t know how many), and there  were two suicidal attempts in those fluoxetine-exposed patients.

Here is the bottom line: at the end of 36 weeks, of the 12 suicide attempts in the three groups, 11 were by youth taking fluoxetine.

In March of 2009, the TADS investigators, led by lead author Betsy Kennard, reported the 36-week safety data for all four groups in the American Journal of Psychiatry. As noted earlier, the 112 youth initially randomized to placebo were given the option, at the end of 12 weeks, to opt for one of the three active treatments.

In this article, it appeared that 15 of the 112 youth in the placebo/open group had a suicidal event during the 36 weeks (3 in the initial 12 weeks, and 12 in the 24-week followup). It was unclear how many of these events were suicidal ideation and how many involved suicide attempts, as this distinction was not reported. Then, in the discussion part of the paper, the researchers muddied things a bit more, writing that 15 of the 112 in the placebo/open group made “suicide attempts.”

Thus, the impression from this report was that there had been a fair number of suicidal events–and suicide attempts–in youth not exposed to fluoxetine. And having presented the 36-week safety data in this way, the TADS investigators drew this conclusion: Assignment to placebo during the initial treatment period “does not increase harm-related events, including suicidality.” Since placebo didn’t lead to increased suicidality, the use of placebo in research settings was “acceptable,” although “delaying the onset of meaningful treatment in non-research settings is not ethical or clinically appropriate.” Fluoxetine was safe, and in normal clinical care, pediatricians and psychiatrists should prescribe the drug as a first-line therapy (and ideally in combination with CBT.)

Now let’s return to the Vitiello paper and his table, which can tell us the real story about the placebo/open group, from start of the trial to the end of 36 weeks.

Here is the data:

During the 36 weeks, no youth randomized into the placebo group attempted suicide while on placebo.

In Vitiello’s table of “first suicidal events,” there are 18 suicide attempts listed for all four groups. Of the 18, 17 occurred in youth on fluoxetine (94%). The one non-drug suicide attempt during the 36 weeks occurred in the CBT alone group, roughly at week five of the study.

In Vitiello’s table, there are 44 total suicidal events listed. Of the 44, 36 were in fluoxetine-treated patients (82%).

Here is a graphic that shows this data. 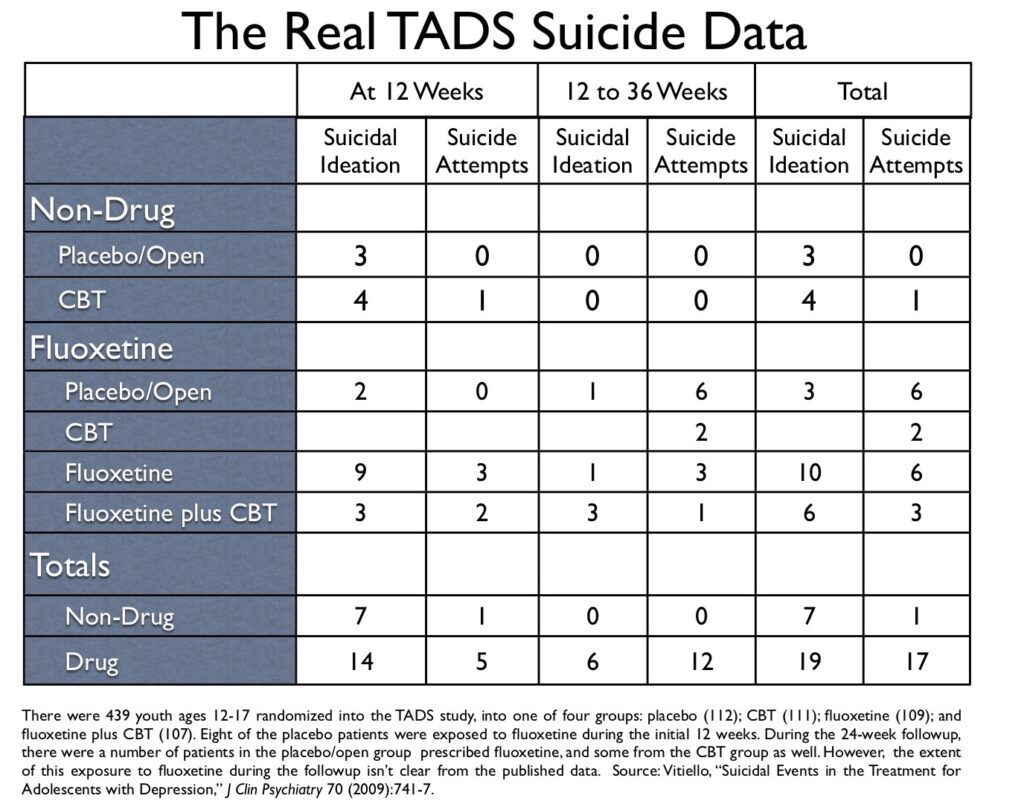 The TADS study has been used to justify the prescribing of Prozac—and really, by extension—other SSRIs to children and adolescents. The TADS researchers reported that the drug treatment was effective and didn’t increase the risk for suicidal events, as compared to placebo. Adding CBT to medication “enhances the safety of medication,” the TADS researchers wrote.

All the while, the real suicide data was being hidden. The TADS investigators weren’t disclosing the number of suicide attempts, and they weren’t reporting that all but one of the suicide attempts were in fluoxetine-treated youth. Instead, they made it appear that a similar number of suicidal events had been seen in the placebo group, and, at one point, even wrote that 15 in this group had attempted suicide.  The real suicide data didn’t appear until Vitiello’s 2009 article, and even then it had to be dug out from a table, which Göran Högberg did.

And so we can ask: Would Toran be alive today if not for this scandal? And how many other youth have lost their lives in this way, unaware of the real suicide data in the TADS trial?