New Zealand has the highest rate of youth suicide in the OECD. The numbers of people who die from suicide in this country are twice that of deaths from road traffic crashes. More young people under the age of 25 die from suicide than from all medical causes combined. Our youngest victim last year was 6 years old and 10% of the deaths of our 10-14 year olds are suicides.

You might think that suicide prevention would be a key focus for the New Zealand government and that public pressure to address the issue would be high. In fact, as the bodies of our children mount up, most New Zealanders are completely unaware of the statistics as the government introduces new legislation, policy and processes to hide the bodies and avoid local and international scrutiny.

In addition to legislation making it illegal for the media and families of suicide victims to talk about suicide deaths, we have moved to reduce the data we collect on suicide and to ensure that the data that is collected is reported in a way that is misleading and downplays the numbers of suicides.

Until 2006, it was compulsory in New Zealand to hold an inquest into a suspected suicide. Legislative change in that year saw the holding of an inquest become discretionary with Coroners having the option of reaching a verdict ‘on the papers.’ This means the Coroner sitting in chambers reading the victims medical file and a file prepared by the police who have no specific training in investigating suicide.

A hearing on the papers means none of the evidence is tested under cross examination but is taken at face value by the Coroner and no expert testimony is produced.

Given my son Toran’s medical file incorrectly records his name and place of birth, incorrectly identifies his primary caregiver and records that a mental health professional last met with him 11 days after he died and 6 days after he was cremated, this is problematic to say the least. The police file on Toran’s death shows the investigating officer failed to interview the last person who saw him alive or the person to whom he made a phone call immediately before hanging himself and forgot to tick the box requesting that his blood be tested for the Prozac which has subsequently been found to be the most likely cause of his death. Inaccurate medical files and incompetent police investigations are standard in the case files of the children whose families I work with.

For most Coroners a medical file showing a child was on antidepressants at the time of their suicide will be recorded as evidence that the child suffered depression and held up to be the cause of their suicide, rather than a signal that the drug may have contributed to the death. This assumption will go unchallenged in a chambers hearing.

The government scientists who conduct toxicology testing in suicide deaths were instructed in 2008 that testing for psychiatric drugs should only be conducted where specifically requested by a Coroner. Coroners advise that they order testing only for drugs suspected to have directly caused the death through poisoning but not for drugs present at therapeutic levels.

Despite a Ministry of Health research report which showed increases in antidepressant prescribing is causally linked with increases in hospitalisation for serious suicide attempts[1], the Coroner’s court does not collect data on the numbers of suicide victims using or withdrawing from antidepressants.

A recent Official Information Act request on trends in hearing types for suspected suicide deaths produced data showing that the percentage of cases being heard at a full inquest dropped from 100% in 2006 to 9.5% in 2010. 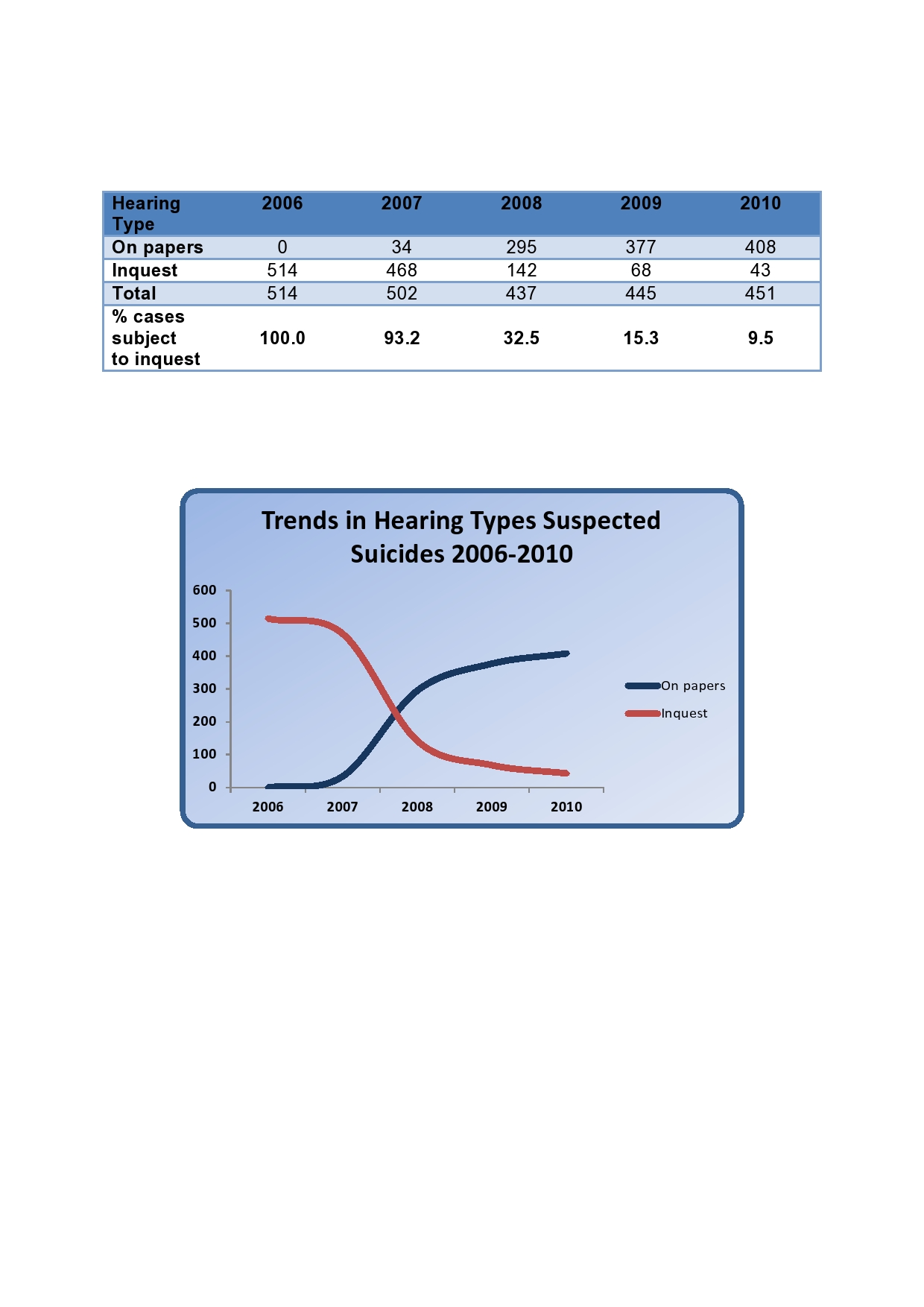 You would think that the advantages of these deaths not going to inquest would be that families would not be left waiting the 2-3 years for hearings that are common in this country. You might think this would allow the Ministry of Health to report suicide numbers in the year the deaths occur, rather than 2 years after, as is standard practice. In fact, the delay in reporting has increased, with the Ministry’s 2009 suicide figures being released on 24 April 2012. Contrast this with road traffic deaths in this country which are updated daily.

So having made sure that as little data as possible is being collected, the government then makes sure the data we do have is reported in a way that misleads people into thinking suicide rates are under control, the problem is reducing and no one need worry their pretty little heads about it too much.

In addition to being outdated, the statistics reported by the Ministry of Health are very obviously inaccurate. The publication on suicides published in 2010, reported 497 deaths from suicide in 2008. Very quietly, without any public comment or media attention, the most recent report revises this figure up to 520 retrospectively adding to the total the 23 suicide deaths (4.7%) that at the time of publication had not received verdicts and were therefore excluded from the published figures.

The report published last week shows 506 suicide deaths in 2009. The Ministry of Health are proudly announcing this is a drop from the previous year’s figure, the revised figure of 520. If however, this report also undercounts the numbers of deaths by 4.7% we can expect the true figure for 2009 to be 529 which of course represents an increase rather than decrease in suicide deaths.

This is the pattern in the official government suicide statistics. Release figures which are known to exclude around 5% of cases and proudly announce they are lower than the previous years figures which have quietly been revised upwards to include the cases excluded in the original count. Revise the figures up again in the next years report without being open about having done so and then use those figures to argue that the latest ones, which also exclude 5% of deaths, are lower than the previous year. Don’t draw attention to the fact that the figures that were proudly proclaimed to represent a drop in suicide numbers last year, have now been increased by 5% and in fact show suicide numbers are increasing.

Despite youth suicide being at crisis levels in New Zealand, the media ignore this deliberate misleading of the New Zealand public and remarkably also ignore the fact that the Ministry’s figures differ markedly from the figures released by the Chief Coroner who reported 541 suicide deaths in 2009 against the Ministry’s 506 suicides.

The Chief Coroner’s figure includes suicides that have not yet had a coroners verdict but which have been reported by the police as suspected suicides. If the Chief Coroner is correct (and he has not revised the 2009 figures in his subsequent reports in 2010 and 2011), then the 541 suicide deaths in 2009 are 6.7% higher than those of the Ministry and represent an increase on the Ministry’s 2008 figures of 4%. That the Chief Coroner has begun to release his own figures speaks volumes about his lack of confidence in the Ministry and his frustration at the 2 year delay in government reporting of suicide data.

In addition to reporting completed suicide, the Ministry report on hospitalisation for intentional self harm. Again however they deliberately skew the data by only reporting data for those hospitalised for more than two days. The vast majority of those who attempt suicide or self harm spend several hours in an emergency room waiting to see a psychiatric registrar and are then sent home to the care of their families. These events are not included in the Ministry’s reporting. Admittance to hospital for self harm or suicide attempts is rare and the figures again, fail to report the true extent of the problem. The Ministry could easily report emergency room cases of suicide attempt or self harm but chooses not to.

Meanwhile in the background we have the poor old Minister with responsibility for suicide prevention, Peter Dunne, desperately trying to convince the public that the OECD is wrong and New Zealand’s youth suicide rate is not the worst in the world. “It is disappointing, but the OECD comparison needs to be taken with considerable caution, especially given that stigma, cultural and social issues in some countries mean there is a real reluctance to report deaths as suicides,” Mr Dunne said[2]

Really Mr Dunne? The US, UK, Australia, Ireland, Canada and other comparator countries are hiding suicides while New Zealand is eager to report them? Their culture and social environments are so different from ours that comparisons cannot be made? The Kiwis reading this will know what I mean when I say this sounds like a Tui billboard.[3]

[3] For those of you who don’t know about Tui Billboards – google images will put you in the picture.