Soteria-Alaska, a program modeled after the highly effective Soteria developed in the 1970s by the late Loren Mosher, M.D., opened its doors in 2009.  I had the privilege of being part of the team who developed Soteria-Alaska and was its first executive director. I was there for almost 8 years and during that time we grew from an idea—really a passion–to a viable home for people who were experiencing personal states usually associated with schizophrenia spectrum diagnoses.

For the benefit of those who do not know about the Soteria approach, I will give a brief description.  In these few words it is difficult to convey the complexities of Soteria.  It is also impossible to convey the actual simplicity, which in fact, is the crowning jewel of the Soteria approach.  In providing this description I will use some terms that reflect disease framework language such as ‘treatment’ and ‘psychosis’ that were used at the time of the original Soteria House and are still used today.  These are not words I prefer to use without explaining them.  Nor are they words that we, at Soteria-Alaska would think are particularly helpful to people participating in this approach.  They are useful, however, so that those reading this who are not familiar with the language of Soteria and other non-disease approaches can better understand.

The Soteria of the 1970’s was an experiment to see if people with a first or second episode of ‘psychosis’ could become  ‘well’—‘respond positively’ if they were ‘treated’ in a homelike environment without antipsychotic medication.  To answer the question, people were randomly assigned either to the Soteria House or to the hospital.  People assigned to Soteria House lived together in a community where they shared chores, meals, conversations, etc.  They were not prescribed antipsychotic medication as the primary treatment, although in some instances other medications such as over the counter Benadryl and prescribed benzodiazepines were used on a temporary basis to help them relax and sleep.

The primary approach was relational and was described at the time as ‘being with.’  ‘Being with’ according to Loren Mosher is the opposite of ‘doing to.’1 The sometimes extreme experiences or unusual, nonviolent behaviors of the people who lived at Soteria were not only tolerated but they were embraced.   People were encouraged to live the experience and make meaning of it for themselves. The people assigned to the hospital were treated in the usual fashion of the time which included what was commonly called ‘hospital milieu’ and antipsychotic medication.  The primary treatment was the use of antipsychotic medications and the goal was to encapsulate the symptoms—make them go away as much as possible so that people could ‘manage’ or ‘stabilize.’

In the short run (6 weeks), there were similar outcomes between the two groups.  In longer term assessments (six months and beyond), the Soteria group demonstrated higher ‘recovery’ outcomes in work, social roles and long term use of medication.  The Soteria approach was not only more effective.  It cost less.2  Another review of the effectiveness of the Soteria approach revealed that it is at least as effective as traditional hospital-based treatment without the use of antipsychotic medication as the primary treatment and may be the preferred approach by people who are in crisis states.3   Considering that people treated in the conventional way die on average 25 years younger than the general population, this review is a substantial finding.4

Soteria-Alaska had similar experiences, although there is not yet enough data or a research design with an experimental control.  An independent program evaluation found that Soteria-Alaska was close to the original model on many domains.  Follow up review of residents found that they did not use antipsychotic medication or greatly reduced their use of antipsychotics while there and after graduation.  They had higher scores on global assessment of functioning and improved living, school and employment outcomes.  Again, at the time of this review the numbers were small and there was not a control group.  However, the trend and the outcomes were very promising.5,6

The Soteria approach is simple in that people are treated with respect and their nonviolent, unusual or extreme behaviors which may not be understood by others are embraced in an attempt to help them make meaning of the experience.  People are allowed the space to work through their mental/emotional/spiritual state.  The helpers are there to guide and witness the experience and to keep them safe.  The Soteria approach is complex in that it is challenging to describe ‘being with’ and to understand how specifically this approach works.  We do know that it does work, however, for some people.  It is clear, anecdotally, that not only the identified participants in this approach experience healing, growth and transformation, but so do some of the helpers.  I am writing this paper as a way of introducing a resignation letter from an employee of Soteria-Alaska that hopefully will give readers a better understanding of Soteria and its effects not only on residents, but on people who work there.  Before I go forward with the letter I have some words upon my own leaving of Soteria-Alaska.

Many have asked how it is I came to be in Alaska and be a part of Soteria.  This is a brief version of my story:  I graduated from college and was somewhat lost as to where I would go from there—not unlike many of the people of my generation and age.  The only job I was able to secure was as a psychiatric aide at Fairfield Hills Hospital, a state run psychiatric institution in Newtown, Connecticut.  At the time I realized that I easily could be one of the people without the keys if my life circumstances were just a bit different.  I met many awesome people who were committed to that institution.

There are several young women who stand out in my memory.  I do not know where these women are or what they have done with their lives.  I do know that they were not provided an environment that was conducive to healing.  In fact, they were traumatized and brutally treated at times by being in the institution.  The traumatizing events included verbal disrespect/abuse, forced and over-use of medication, institutional setting, and in some instances, electro convulsive therapy (ECT)—shock treatments.  I cried for these young women and was angry at some of staff who were more institutionalized than the people who were committed there.

Please do not get me wrong, there were many compassionate staff as well, however, they were incapable of making any substantive changes to the institution as they, too, were disempowered.  I left that setting as soon as I was able to obtain another job (about one and a half years), so that I would not become callous and institutionalized as I observed in some of the ‘lifer’ employees.

During the time I was at Fairfield Hills Hospital, I knew nothing of the Soteria House in California that was providing a more compassionate form of ‘treatment.’  I did promise myself that if I ever had the opportunity to do something different that I would do it.  It was a commitment I almost had forgotten when I received an email 30 years later calling for an executive director for Soteria-Alaska.  I did not respond.

The next day I received another similar email from a different person and did not respond. A day later the third email came through. At that point I decided the fates were calling me and while I had no interest in being in Alaska, I responded, was offered the position and have been there ever since.  (By the way I have grown to love Alaska and the people who live here.)

I lived, breathed, and dreamed Soteria for eight years of my life.  It was never my intention to stay that long, but it was what was necessary to insure the Soteria-Alaska longevity.  I felt very keenly that there were many people worldwide looking to us to bring back the Soteria approach. Well, it is not 1970 anymore — and the disease model funding is very challenging — but I think we kept the most important ingredients of Soteria and succeeded in opening a viable Soteria approach program.  I am very hopeful knowing that there is a Soteria-Vermont in the making, a group in England promoting a Soteria approach and folks in California and Oregon looking to develop a Soteria approach.  I am closely watching the development of Open Dialogue in the US and hope that we can figure out a way to marry the two approaches and incorporate them into our standard of care.

Upon leaving Soteria-Alaska this year, I find myself grieving the loss of the Soteria community.  I do not miss the stress of trying to balance the budget or the stress of administering a healing program in a disease driven health care system.  I do not miss the stress of the non-profit world which includes working with boards who are voluntary and are often passionate, but may not be sophisticated in the approach, and that spend much time grappling with their roles and shared vision.  I do not miss the phone calls in the middle of the night from helpers or residents looking for guidance in a particular situation. (Well, sometimes I do miss that).  I do, however, miss the community of people who were my transient family during those eight years.

The letter below, written by Matthew Ladner, an employee of Soteria, is much more eloquent on the topic of the effects of this community on its residents and helpers than my own words convey. 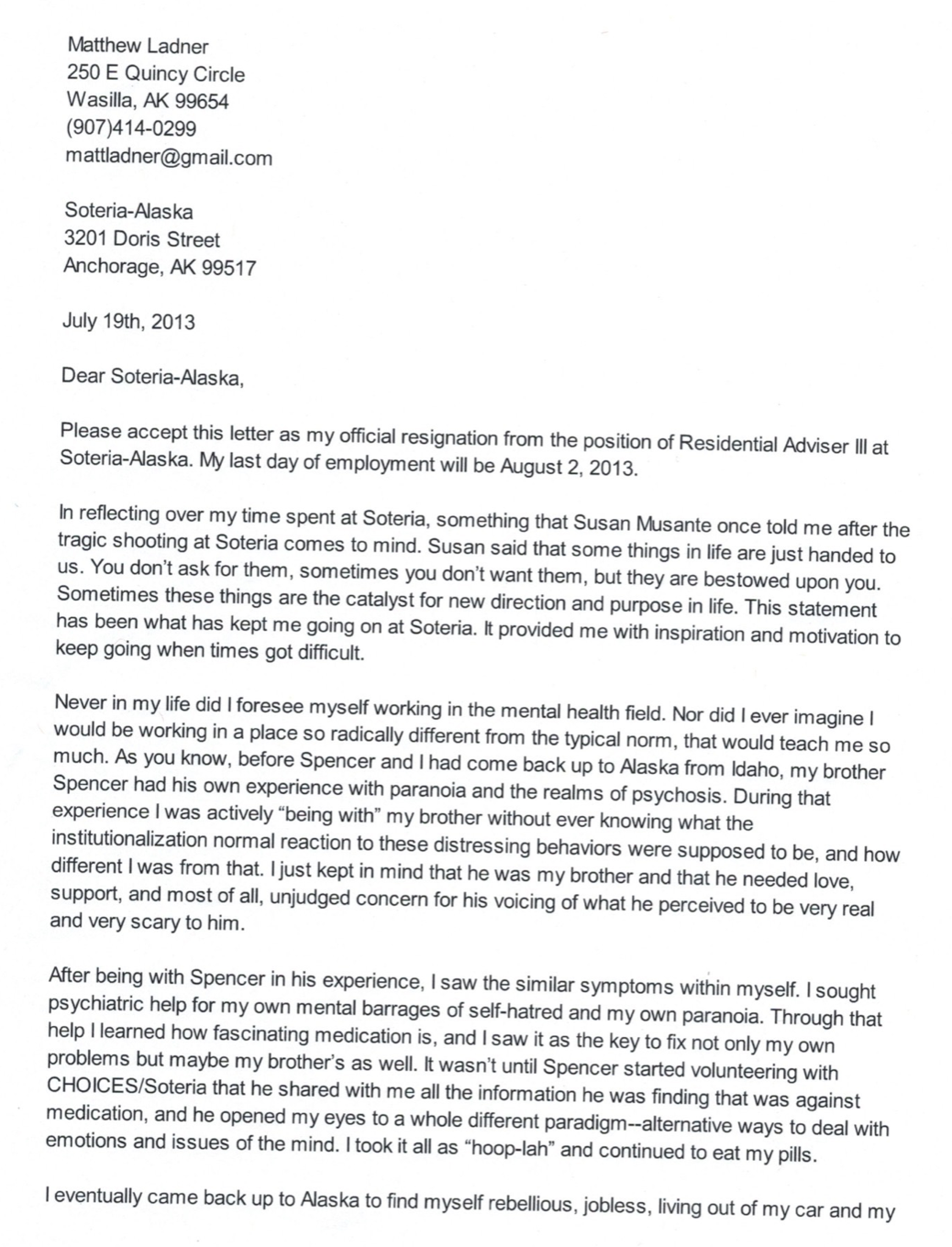 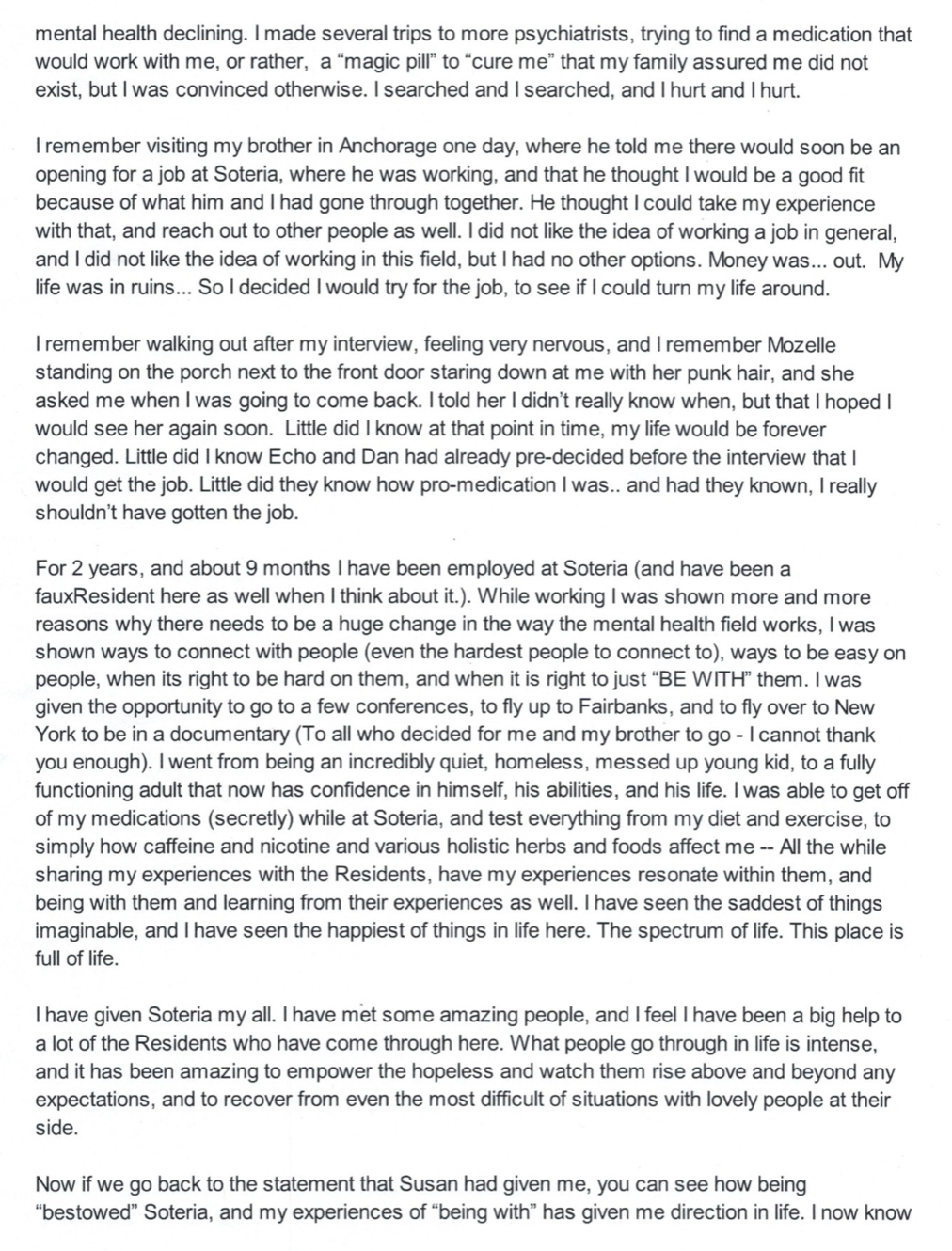 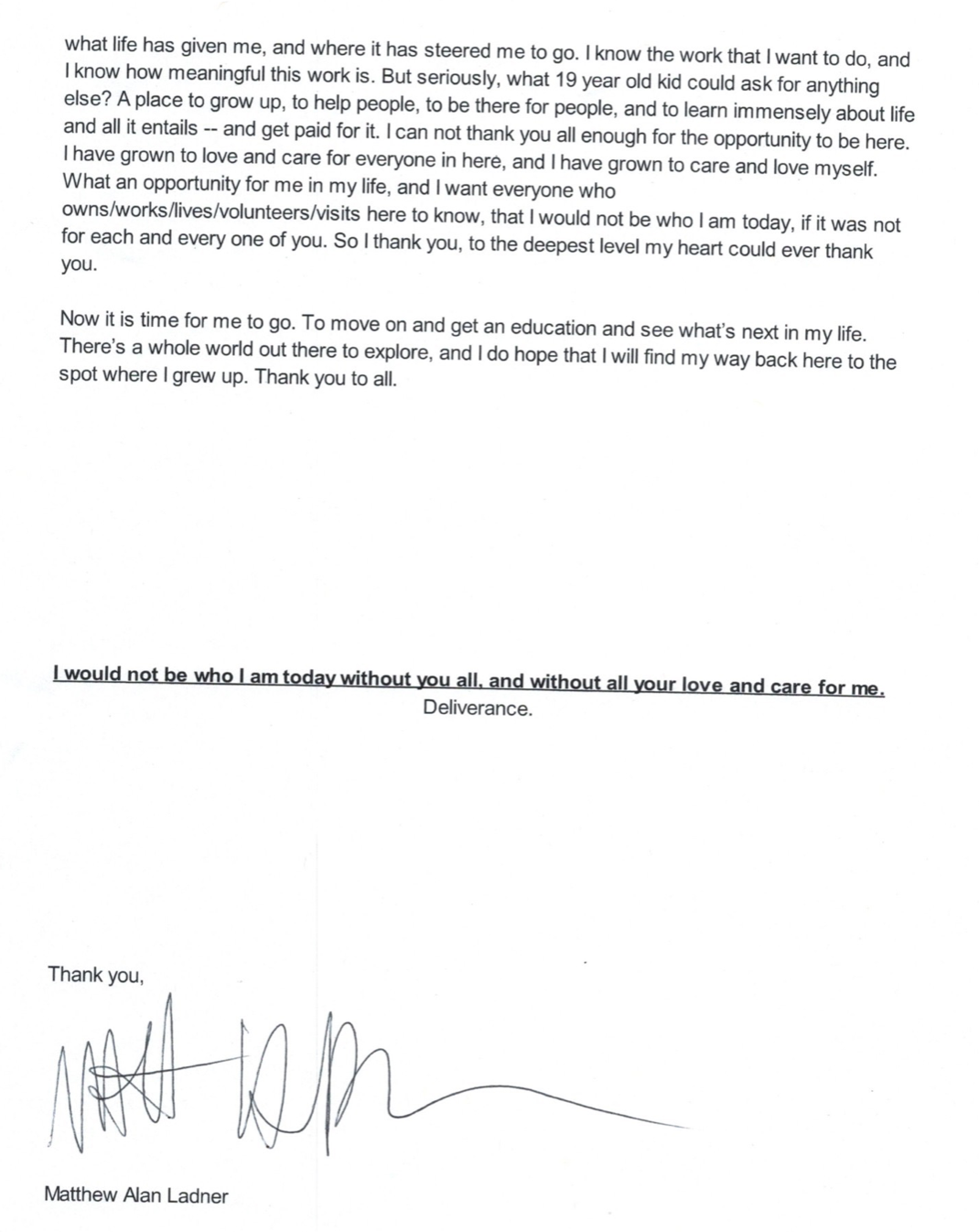 “State of the Re:Union Short: Soteria”

“This Place is Full of Life”: On Deliverance at Soteria Alaska