New research suggests that more frequent in-person contact lessens the risk of depression in older adults. The study, published in this month’s issue of the Journal of the American Geriatric Society, found that in Americans over fifty the more face-to-face contact they had with children, family and friends, the less likely they were to develop depressive symptoms. 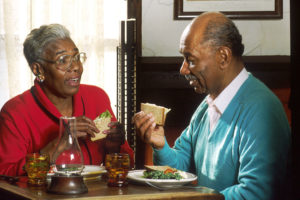 Over the past several decades, research has continued to accumulate tying social networks and interpersonal relationships to both physical and mental health outcomes. A 2011 study directly attributed over 160 thousand deaths to low social support, and another found that loneliness predicted functional decline and earlier death in adults over sixty.  Until this point, however, researchers have not attempted to tease out the particular effects of different forms of social contact on depression.

To be able to make such comparisons, between email, phone calls, and face-to-face contact, for instance, a team of researchers led by Dr. Alan Teo analyzed data on a nationally representative group of 11,065 adults over age fifty who were surveyed every two years from 2004 to 2010. Participants were asked about their relationships with their children, the rest of their family and their friends, and about how often they communicated with these groups in various ways.  Did they meet up? Call? Send emails?

The researchers found that participants who had in-person contact with any of these social groups just once every few months had an 11.5% chance of developing depressive symptoms, compared with just a 7.3% chance for those who had this kind of contact once or twice a week. Out of the three social groups, it appeared that it was most important to have in person contact with friends, rather than phone or written contact.

When they researchers broke down the results by age they noticed that for those in their 50s and 60s, social contact with friends was particularly important. Whereas for those over 70, contact with children and family was more influential for preventing depression.

“These results support the claim that how and with whom a person has social contact affects future risk of depressive symptoms,” the researchers wrote.

The most important finding is that while telephone contact is the most frequent form of communication, it does not have the same effect on the risk of potential depressive symptoms in older adults that in-person contact does.

The researchers add that an increased reliance on online forms of contact, like Facebook, could have public health ramifications and increase the risk of depression across the population.

They conclude: “Public health strategies that promote or facilitate in-person social contact may be particularly helpful for primary prevention of depression.”