Last year the British Medical Association (BMA) released a report on dependence and withdrawal from prescription drugs including benzodiazepines, z-drugs, opioids, and antidepressants. Now, in light of their findings, the BMA is commiting to changes to medical practice, policy, and research.

The BMA held a meeting on February 25th to agree on the first steps needed to tackle prescription drug dependence to psychiatric drugs. Mad in America authors Joanna Moncrieff, James Davies, and Peter Kinderman were in attendance along with representatives from the Council for Evidence-based Psychiatry (CEP), several medical and physicians groups, and dependence and withdrawal organizations.

Luke Montagu, co-founder of CEP, began the meeting with a short speech.

“You cannot fail to be moved by the suffering and loss; the effects on mothers, children, and marriages, on good people who have worked hard to build good lives, only to see them implode as they struggle to cope with quite intolerable symptoms,” he said.

“And then listen to them describe the double injustice of having their suffering denied, of doctors refusing to accept that it could possibly be the drugs.”

The full text of Montagu’s speech is available here→

As a result of the meeting, the BMA released the following list of action steps to be taken by the relevant attendees. They plan to reconvene for a follow-up meeting in July to assess progress. 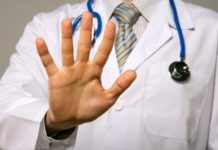