On Monday 9th January 2017 Theresa May, Prime Minister, launched a package of measures to improve mental health across the UK. Speaking about preventing and reducing suicide, she committed her Government to providing:

“Further alternatives to hospital to support people in the community. Recognising that seeing a GP or going to A&E is not or does not feel like the right intervention for many people with mental ill-health, the government will build on its £15 million investment to provide and promote new models of community–based care such as crisis cafes and community clinics. The initial £15 million investment led to 88 new places of safety being created and the government now plans to spend up to a further £15 million to build on this success”

The very next day on Tuesday 10th January, the ‘Place of Calm’, a suicide prevention service in Eastbourne, a seaside town in Sussex, where incidentally Theresa May was born, was told by the local Commissioners, who fund mental health care, that their funding would be cut. This would require them to shut the service by the end of March 2017.

Two worlds — the world of the politicians and those who make policy completely at odds with the world of the people actually doing the work. I think it is pretty clear which of these two worlds constitutes what one might call ‘the real world.’

For me this was not a good start to 2017. 2016 had been a simply terrible year — starting with the death of David Bowie and going gradually downhill from there. 2016 ended for me with the news that a friend and colleague had taken his life on New Year’s Eve. He was a man under the age of 50 and had died in the way that is most common for men of his age in the UK. He had not been in touch with the Place of Calm. Perhaps, if he had been, he would still be alive today.

The Place of Calm is a peer-supported 24/7 crisis service and offers a supportive sanctuary for people who are suicidal or in mental health crisis in Sussex.

More than 30% of suicides take place in a public space. Sussex has a higher than average suicide rate in England, due mainly to the impact of Beachy Head, a public place widely used for suicide attempts. For the period 2006–2013 there were an average of 77 suicides per year in East Sussex.

People who have stayed at the Place of Calm have said:

“I cannot speak highly enough of my stay at the Place of Calm. I felt that I was given the space when I needed it and completely supported when I needed it too.  I really appreciated not being judged by anyone and all my needs were met during my stay.”

“The staff went above and beyond, if it wasn’t for the support of the Place of Calm I don’t know where I would be, it was a life line for me. To have that as an alternative saved my life.”

“The staff were so kind and listened, it was a life saver.”

“If it were not for the Place of Calm that day I would have taken my own life. I would like to thank all that looked after and supported me during my stay which has led to me feeling so much better.”

The Place of Calm began as a pilot project in June 2015 and initial funding was continued until March 2017, but is now due to be withdrawn. This is such a waste of money as all the groundwork has been done and the service is operating well.

The Place of Calm’s innovative Peer Support Approach means suicidal people can stay up to 24 hours in a safe place in the community and receive practical and emotional support from trained professionals who have their own lived experience of mental health challenges.

The Place of Calm offers suicide prevention safety planning, emotional and psychological support, and practical support such as signposting, food, and a place to shower and sleep.

Over 70 people have stayed at the Place of Calm since it was set up, and follow-up surveys have shown that 100% of respondents said they were made to feel less suicidal, with 94% saying that Place of Calm ‘saved their life’ that day.

Studies show that most suicides are preventable. People with experiences diagnosed as “mental illness” are at higher risk of suicide, and the treatment and care they receive after making a suicide attempt is an important factor in reducing further suicide attempts.

Evidence suggests that not only does it save lives, the Place of Calm is cost effective, with calculations showing that for every £1 spent on the project, nearly £6 is saved from Health and Social Care spending. At a cost of just over £100,000 per year to run, the Place of Calm potentially saves public services £600,000 each year.

A 2016 evaluation by the University of East London (Briggs, Finch and Firth) demonstrated very positive results, showing that The Place of Calm:

This is exactly the sort of service that everybody wants and has been calling for over very many years. I can remember that when I worked as a social worker in the 1970s, we argued for just such a service. Anne Cooke also covers this topic in writing about a crisis house in London in “I’d Rather Die Than Go Back to Hospital’: Why We Need a Non-medical Crisis House in Every Town.” (MadInAmerica October 28, 2015)

Currently there is a petition: We call on East Sussex Health and Social Care Commissioners to continue to fund the Place of Calm suicide prevention service. 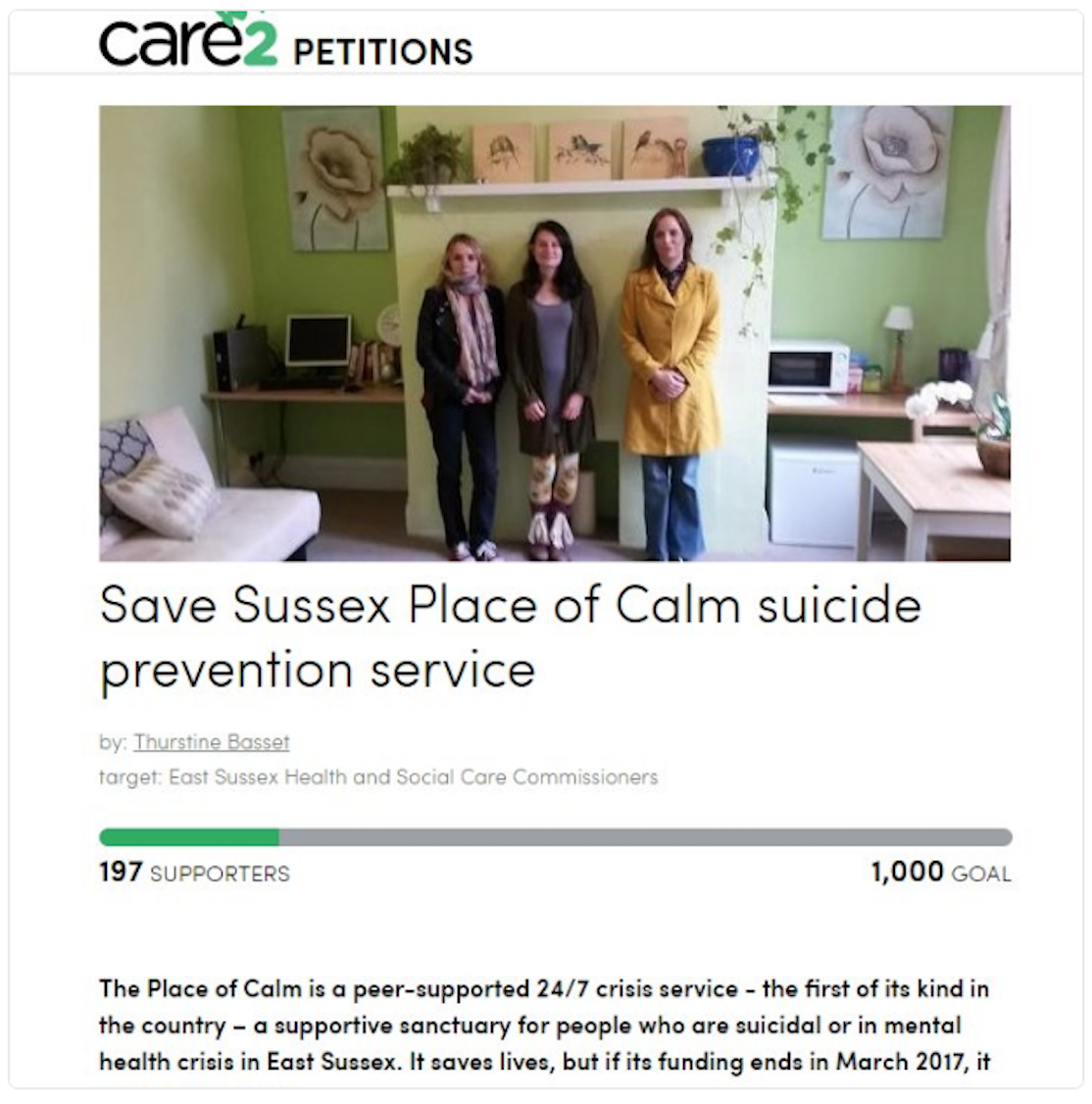 If you are able to sign this petition it would be a great help. Thank you.