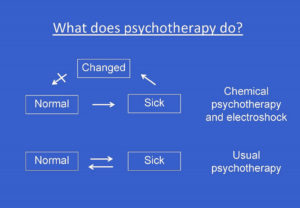 Chemical psychotherapy is what we usually call psychiatric drugs. They also change the brain, but not back to normal. They create an artificial third state that is neither normal nor the diseased state the patient came from. This creates many problems. Above all, it is a dead end, because you cannot get from this artificially induced state back to normal. There are simply no psychotropic drugs that are capable of this. Their effects are quite unspecific and comprehensive.

Psychological psychotherapy aims to enhance the normal brain functions, thereby creating as normal reactions as possible to the challenges life offers. Many mental disorders involve the patient responding inappropriately to traumas and emotional swings, and it therefore makes sense to teach the patient to think and react more appropriately. It can also make a lot of sense to change the patient’s environment, but this is often overlooked.

Chemical psychotherapy does the opposite. Psychiatric drugs disable a number of important brain functions and can lead to decreased interest in life in general (apathy), withdrawal from social relationships, lack of empathy and care for themselves and others, and at worst emotional numbness. Empathy helps us recognize the suffering we inflict on others through impulsive actions, and thus empathy helps restrain us. 1 A reduction of empathy is one of the mechanisms whereby psychiatric drugs can cause suicide and violence, and at worst homicide.

Psychiatric drugs can lead to loss of important human functions that are associated with motivation, creativity and love. These toxic drug effects on higher brain functions are often interpreted as an “improvement” (the patient is apparently less disturbed or disturbing to staff, family and friends). 2 But they are in fact an expression of brain damage.

Prolonged use of psychotropic drugs can cause permanent brain damage, which can make it impossible for the patient ever to return to normal, and also cause a return to the disease state the patient originally came from where psychotherapy and environmental changes might have had a good effect.

Electroshock works in the same way, namely by damaging the brain, and the damage is often permanent, especially in the form of memory loss. 3

It is no wonder that in all countries where this has been studied, the increasing consumption of psychotropic drugs has been accompanied by an increasing number of disability pensions. 4 Another example that we do it wrongly is the huge consumption of antidepressants. Antidepressants increase the risk of suicide, not only in children and adolescents, which we have known for many years, but also among older people. 5 Psychotherapy reduces the risk of suicide. 6 This is one of several reasons why patients with depression should be treated with psychological psychotherapy and not with chemical psychotherapy. 7

The Need for Person-Centered Psychotherapy Training in Psychiatry