This is part one of a lecture given at a British Neuropsychiatric Association meeting in London on February 22 under the heading of Psychopharmacology: 1952–2017. Slides 1–11 can be found here. 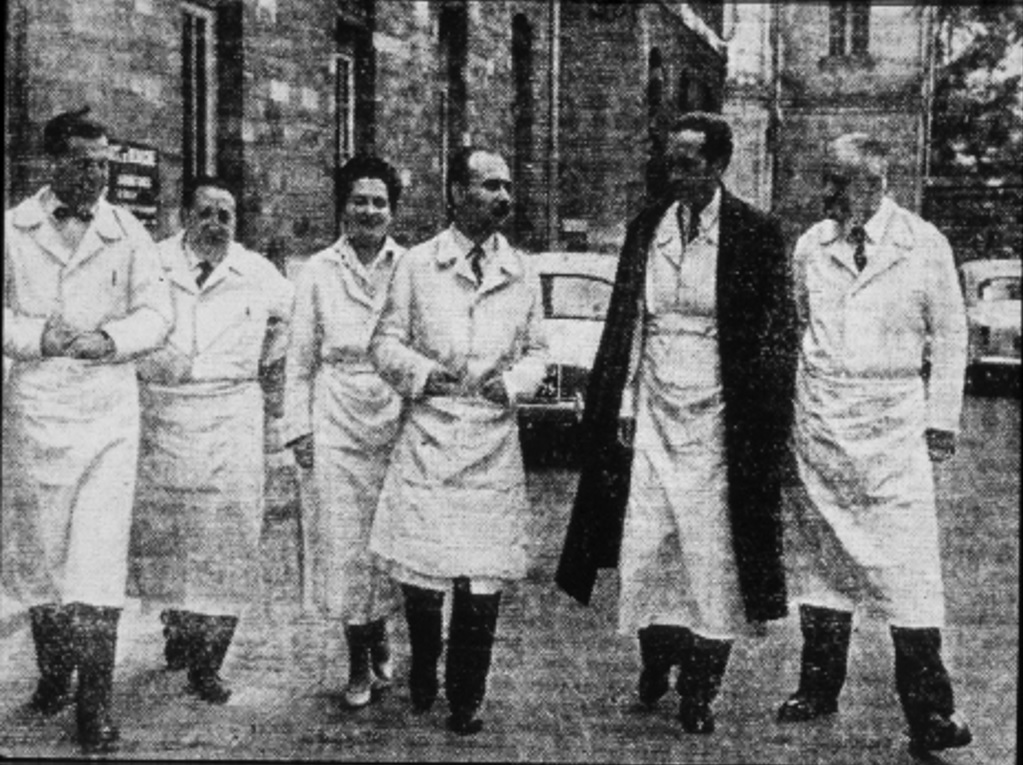 This picture is taken from a newspaper in 1952. It features Jean Delay wearing a navy coat, with Pierre Pichot on his right and Pierre Deniker on his left (slide 1).

Within the hospital behind them, the ice has just melted. Following the ideas of Henri Laborit, they had been giving chlorpromazine which blocks the body’s responses to being chilled down. The hope was that radical cooling would chill patients out in a way that would be useful in the treatment of nervous problems. This was called Hibernotherapy — which always sounds good to an Irishman.

The nurses observed that neither the ice nor the Irish were needed — chlorpromazine given on its own was a chill pill. The nurses were written out of a script that had Delay and his team discovering the antipsychotic effect of chlorpromazine, the discovery that underpins modern psychiatry.

The photograph has always suggested to me a father after the birth of a first child rushing out to tell the world the good news. But this is far from a spontaneous photograph. There is a rigid hierarchical arrangement here. Delay is distinguished by his navy blue coat, which he and only he wore around the university and hospital ground. When he was later elected to the Académie Française, he would wear the ceremonial sword that went with membership whenever possible. He would have been a Sir in the UK. He is talking to Pichot rather than to Deniker, the discoverer of chlorpromazine, because Pichot is, strictly speaking, the second most senior person in the Department.

There are things happening in the background, however, that will change everything. In the course of World War II, psychiatrists in the military have discovered that group therapies can have a dramatic impact on the nervous disorders produced in soldiers by the war. These therapies work best, it seems, where they involve a dissolution of the hierarchies of both pre-war European social life and Army life. The more informal the setting, the better.

The other thing that is happening stems from another war that began in 1914 — a War on Drugs. This began with the Harrison’s Narcotics Act, which made opiates and cocaine available by prescription only. In 1951, a Humphrey-Durham Amendment to the 1938 Food Drugs & Cosmetics Act made all the new drugs produced by the post-war pharmaceutical revolution — the new antibiotics, antihypertensives, antipsychotics, antidepressants, anxiolytics and other drugs — available by prescription only.

One of the consequences of this is that chlorpromazine and the later antidepressants bring about a de-institutionalization of… psychiatrists. Not their patients.

Not everybody is happy with the new arrangement. Many complain that a system designed for addicts is not appropriate for the citizens of a free country.

A combustible set of ingredients has been put in place that will lead to an explosion. It only took 16 years for the explosion to come.

In slide 2, you see Tokyo University on fire. Tokyo sits at the apex of the Japanese hierarchy. The students have occupied the Department of Psychiatry and stay for ten years. Psychiatric research in Tokyo is brought to a halt. The most powerful psychiatrist in Japan, the professor of psychiatry in Tokyo, Hiroshi Utena, is forced to retire.

Why this, only 16 years after chlorpromazine had liberated the insane from their straitjackets? Delay boasted that chlorpromazine restored humanity to the asylums. Previously, lunatics had been guarded by jailers, who treated them brutally. Now it was possible for therapists to see the humanity of their patients and talk to them. The level of noise in the asylum had fallen.

However, the times have seen the emergence of an antipsychiatry that responded that real straitjackets had simply been replaced for chemical straitjackets — the camisole chimique. The silence within the walls of the asylums is the silence of the cemetery.

By 1968, another drug, the oral contraceptive, had begun to transform the social order by changing relations between the sexes (slide 3). In 1968, for the first time, the French clothing industry produced more trousers for women than for men. By 1968, feminism had appeared to challenge the colonization of women’s minds by men.

1968 saw the culmination of a project begun by Rousseau and Voltaire, the Enlightenment. This was a project which supposedly dethroned kings and gods. It claimed that the people should be ruled by the people and that an individual’s place in society should depend on merit. But white middle-aged and middle class men were still in control. Women, the young, and other ethnic groups had no place — until 1968.

The antipsychiatrists had a number of powerful weapons in their armory. One was ECT. As Thomas Szasz put it — what the rack and the stake was to the Inquisition, ECT is to organized psychiatry. Its visibility gave it a pivotal role in the pivotal movie One Flew over the Cuckoo’s Nest (slide 5).

Another weapon was tardive dyskinesia. This was first described in 1960. By 1968, it was clear that it was a common and disabling side effect of antipsychotic drugs. It was neither the most common nor the most disabling, but it was the most visible (slide 6).

The response from much of psychiatry was the same response as from psychoanalysts to criticism against psychotherapy. When the treatment failed to work, they claimed it was the disease not the treatment that was at fault. Similarly, psychiatry blamed the disease rather than the drugs. Just as we have since done with the SSRIs and suicide.

However, the visibility of tardive dyskinesia was a real problem. By 1974, SmithKline & French had settled their first legal case for over $1 million. With this settlement, a generation of antipsychotic discovery came to an end. It was to be almost 20 years before any more new antipsychotics emerged (slide 7).

Meanwhile in 1957, Leo Hollister (slide 8) had run a double-blind, placebo-controlled trial of chlorpromazine in patients with no nervous conditions at all, demonstrating that it produced marked physical dependence. There were hopes that chlorpromazine might be useful for TB, which led to the trial. On stopping after six months without benefit, many of those taking it had clear withdrawal problems.

By 1966, a large number of studies had confirmed that there was a marked and severe physical dependence on antipsychotics present in large numbers of people taking them, even at low doses for a short period of time. This led to the concept of therapeutic drug dependence. A concept that blows a hole in most theories of addiction we have. These drugs produce no tolerance, no euphoria. They produce post-discontinuation changes as long lasting (as in tardive dyskinesia) as the changes underpinning current disease models of addiction.

But the recognition of antipsychotic and antidepressant dependence vanished around 1968, when the War on Drugs was declared.

This political rather than scientific decision set up a crisis when physical dependence on the benzodiazepines emerged. This broadened to an extraordinary crisis, which led to the obliteration of the anxiolytics and indeed almost the whole concept of anxiolysis. By 1990, physicians in Britain and elsewhere regarded benzodiazepines as more addictive than heroin or cocaine — without any scientific evidence to underpin this perception (slide 9).

Another problem was that while the antipsychotics did help restore people to life outside the asylum, the drugs were also used for the purposes of control. In Britain today we detain people at a three times greater rate than 60 years ago. We admit people at a 15 times greater rate than 60 years ago. On average, patients are spending a longer time in service beds than ever before in history. New conditions such as personality disorders are being admitted to hospital and the management of violence and social problems has become an issue for psychiatry (slide 10). The figures are more consistent with a de-institutionalisation of psychiatry. Unselfconsciously, psychiatrists claim we are treating more patients than ever before. We are.

This is not what happens when treatments work. In the case of TB and GPI, the beds closed and the staff were redeployed.

This all combined to lead to the greatest possible symbol for the times. On the next slide, you can see the protests in Paris — the epicenter of the 1968 Revolution. The students are on the march. Without knowing the story you already know where they are heading. Their march takes them to the office of Jean Delay, which they ransacked. Delay doesn’t retire immediately but he is a broken man. He has no sympathy for the new world, in which students can expect to address their professors in informal terms (slide 11).