A new study, published in the Journal of the American Medical Association, links direct-to-consumer (DTC) advertising to increased testosterone treatment, even when patients do not have a diagnosable condition.

The authors measured the frequency of television advertisements for low testosterone (“low-T”) in 75 different areas of the US, as well as rates of medical testing for low-T and prescription of testosterone treatment (androgen replacement therapy, or ART) in those regions, from 2008 to 2013. They found that increased exposure to advertising content was correlated with increased testing for low-T, as well as increased prescription of ART. Troublingly, advertising presence was also correlated with an increased number of men receiving testosterone treatment without first being tested for low testosterone. 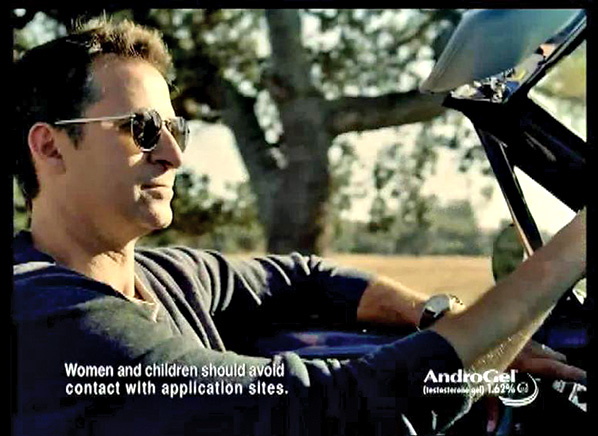 Androgen replacement therapy was a booming industry during this time period, with sales reaching $2 billion in 2012. The researchers in this study found that out of the 17 million men in the regions surveyed, over 1 million received tests for low-T. Almost 300,000 of the men began receiving ART during this time period.

For men who have a rare, diagnosed medical disorder, ART can be a vital treatment. However, most men receiving supplements do not have such a condition. In fact, a recent study found that over 1/3 of new prescriptions were written for “fatigue.”

Numerous studies have demonstrated that ART has no beneficial effects on mood, well-being, cognitive function, libido, strength, or sexual function—despite the advertising campaigns that claim it does. The treatment is also linked to potentially deadly cardiovascular events. Because of this danger, and the lack of benefit, in 2015 the FDA imposed limits on advertising—preventing pharmaceutical companies from targeting anything that was a “symptom” of normal aging, like fatigue and lower libido.

But the FDA’s limits only apply to advertising with branded treatments—so drug companies are still free to market the idea of low-T as an explanation for the symptoms of aging. The researchers in the current study wanted to distinguish between branded advertisements and unbranded “awareness campaign” advertisements. They found that unbranded advertising was associated with similar increases in treatment, indicating that the promotion of certain traits (such as fatigue and lower libido) as a “disorder” will still effectively convince people to request treatment—a convenient loophole for the pharmaceutical industry.

How much impact does advertising have on choice of treatment? Researchers have reported that DTC advertising “may lead to inappropriate and costly demands for medications when the evidence would dictate other medications or nonpharmacological interventions.” For example, “adjustment disorder” is the psychiatric term for the experience of feeling down after a dramatic life stressor. Researchers found that “patients with adjustment disorder (a condition that is usually treated without medication) who made a request for a brand name antidepressant were five times more likely to receive a prescription for antidepressants” (emphasis mine). Thus, DTC was found to influence prescriptions, despite it being counter to the recommended treatment.

Currently, every industrialized country has a ban on DTC advertising except the U.S. and New Zealand. Last year, the American Society of Health-System Pharmacists and the American Medical Association put out statements against DTC advertising in the US. The organizations say that pharmacists and physicians have to spend a great deal of time explaining to patients why the products may not meet the patient’s needs, particularly when patients are requesting a specific treatment that may not be appropriate for their condition.

One of the implications of this current study is that DTC advertising appears to make consumers more likely to receive treatment even without the presence of a diagnosable disorder. Given the high rates of DTC advertising for mental health concerns, such as advertisements promoting the use of antipsychotic medications for depression, this finding is particularly concerning. According to a statement by the United Nations, depression and other mental health concerns are already associated with overdiagnosis, overtreatment, and overprescription. This study implies that DTC advertising may play a large role in that phenomenon. The findings suggest that more restrictions on advertising—as in almost every other industrialized nation—may mitigate the public health crisis of overprescription.