In this special report for the Journal Sentinel, Meg Kissinger tells the story of Amanda Farrell, a woman labeled severely mentally ill who eventually recovered and now serves as a peer specialist. Kissinger discusses the role that overmedication played in the decline of Farrell’s mental health.

‘It felt like someone was taking my brain and squishing it out like a washcloth,” she said. “I was a zombie.’

Doctors and family members often agonize when people with serious mental illness won’t take their medication, putting themselves and others at risk. Little attention is paid to a common and equally dangerous problem: those who are given too much medication.

Treatment guidelines warn doctors not to prescribe more than one antipsychotic at a time. Farrell’s medical records show that she often was on two antipsychotics in combination with three other psychiatric drugs for anxiety and depression.” 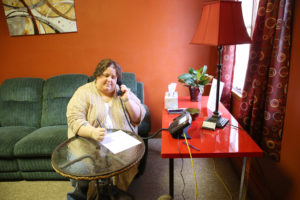