It is not hate that kills, as much as it is silence. That is why Division 32 of the American Psychological Association is encouraging all caring parties to likewise give voice to the values that stand for our very humanity, as Humanistic Psychology emphasizes. In response to hate speech and violence in Charlottesville, it is clear that the White House was unable to display spontaneous benevolent leadership and awareness of the role a president plays during national crises, stepping up in critical moments to set an ethical bar as well as legal ones. Yet, we needn’t be surprised by this lag in conscience, a lack of emotional intelligence or well thought out advance planning born of a self-reflective exploration, because there is nothing on which to base such an expectation.

In the context of mindful approaches to psychotherapy, every moment of life conditions the moment that comes after it, or said another way, every moment is conditioned by the one that came before it, by the one that preceded it. We must act thoughtfully, mindfully, and compassionately because cause and effect are interdependent. Reactions are spontaneous, empathy and leadership organically arise to meet the moment, producing human, and humane, responses. Thus, what we saw in Charlottesville was the result of all the many, many moments that caused it, that came before, that preceded it.

Much of the country wept on Saturday, after Friday night’s nightmarish torch-bearing foreshadowing of the next day’s flashbacks of racism, covered faces, hiding, and hatred. Many of us deeply inhaled on Friday night and found ourselves breathless, and remain so even today. The solution doesn’t only lie where we already know there is a massive and huge problem, but in the danger of propagating a resigned silence. This ennui engulfs a person or group of persons in a vacuum of hopelessness. So hope rests fully in saying no to silence.

Heather Heyer was martyred in Charlottesville as result of racism. Her mother, Susan Bro described her daughter’s caring way: “It was important to her to speak up for people she felt were not being heard, to speak up when injustices were happening.”

As psychologists, we can similarly fight silence by becoming active voices on radio, television, the internet, local and national newspapers, blogs, website postings, and all the other platforms that exist for us, speaking and posting against bigotry and fear, spreading instead the words of inclusiveness, of love, of a radical “one love” for all others and for ourselves, that says a large “no” to hate, so large that love itself is felt as a backlash. We can withstand it, I know.

We need only continue the work of Rev. Dr. Martin Luther King, Jr., who will always be the arbiter of peaceful non-violence, a politics of love. Perhaps there is an intersection where politics and love can find a synchronicity in our time, modeling Dr. King’s dignity, civility, Godliness, and love, patience, compassion, humanism, wisdom, and grace. We can emulate this stance dedicated to Dr. King’s vision of Beloved Community.

As Humanists, and simply as humans, we should not only speak out concerning what we are against, but what we are for: empathic regard, understanding of others’ suffering and pain, self-affiliation as a genuine love for oneself, and as philosopher Martin Buber described it, an I-Thou presence with other beings, that underlies a necessary trust.

The Society for Humanistic Psychology speaks out at this time, joining with other APA divisions and all those who are broken-hearted as a result of the domestic terrorism and unrestrained racism and “other-making” we’ve witnessed that starkly reminds us of a human capacity we’d be best served to acknowledge as “shadow” and then work against, re-affirming a commitment to stand up and be heard on issues of social justice and equality.

We are within our professional code to declare that this White House differs in ways that may give rise to a crassness that has its own economics, a trickle-down that apparently finds people emboldened to march in the name of their own crassness, and more. As we find America at this crossroads in the summer of 2017, we are called upon to cool the heat that we feel in our political system by banding together in the name of love, a sober, cooling love. This upheaval is an important opportunity to advocate for the America we want to see.

At this critical juncture, Division 32 issues A Call to Action for psychologists to engage proactively with media platforms, and through clinical practice, community intervention, and policymaking to promote Humanistic values of compassionate inclusion, multicultural innovation, empathic regard, self-responsibility and love, in an effort to negate racial and cultural disparities, and make real the vision of flourishing, optimally functioning beloved communities.

On behalf of the Board of Division 32 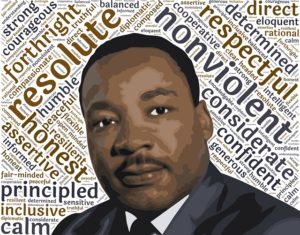