In this piece for Beyond Meds, Chris Cole examines the intersection of racism and oppression against people labeled “mentally ill.”

This is not entirely unlike how I see marginalized groups in our country, regarding racism especially. To use a historical example, In 1851, the physician Samuel A. Cartwright (1793–1863), coined a term ‘drapetomania,’ which he described as a treatable mental illness, saying, ‘With proper medical advice, strictly followed, this troublesome practice that many Negroes have of running away can be almost entirely prevented.’ As a white man today, who has experienced my fair share of mania, I can only tell you that Dr. Cartwright was not entirely wrong: mania is an emergency mechanism in the psyche, telling us to run like hell, only I’m not running from oppression; I’m running from the delusions of a white supremacist culture which consistently and systematically indoctrinates me into empathetic dissociation disorder. I am running away from all the messages which convinced me that my heart is not welcome, that the Love of Christ is to be worshiped only, never emulated, and that forgiveness for this life was more critical than the Love already available to us now. I’m running away from Christianity as an identity, running toward Christ as a measurement.” 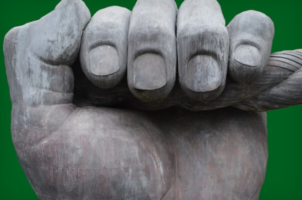