“Debating the validity of diagnoses is a good thing. In fact, it’s essential we do it. Lots of DSM diagnoses, as I’ve argued before, poorly predict outcome, and sometimes barely hang together conceptually. But there is no general criticism that applies to all psychiatric diagnosis.

There are many good critiques on the validity of specific psychiatric diagnoses, it’s impossible to see how they apply to all diagnoses.” 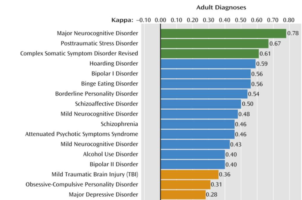