From Next Avenue: The drug Nuedexta has only been approved for patients with multiple sclerosis (MS) and amyotrophic lateral sclerosis (ALS). However, the maker of the drug is increasingly pushing it on nursing home residents with dementia and Alzheimer’s, with sometimes dire consequences.

“A 2015 study by Avanir tested the use of Nuedexta in a study of 194 Alzheimer’s patients exhibiting agitation; 152 of them received the drug. While the investigators wrote that the agitation of those receiving the drug ‘significantly improved’ compared to those taking a placebo, the CNN report points out that more than twice as many patients (8.6 percent) on Nuedexta experienced falls compared with the placebo group (3.9 percent).

Some patients experienced more serious effects: CNN says it wasn’t long after Nuedexta was approved in 2011 that health providers and family members ‘began filing reports of potential harm.’ Some included coma and death. Nuedexta was listed as a ‘suspect’ medication in nearly 1,000 adverse drug event reports to the FDA, CNN reports. (Those don’t necessarily mean that Nuedexta was ruled the cause of the reported problem.)” 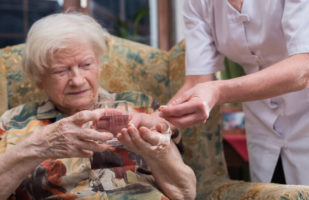