From Science of Us: The Washington, D.C., Rape Crisis Center, Collective Action for Safe Spaces, and ReThink, an organization that works to prevent sexual assault, have partnered to offer a class called Rethink Masculinity. The course helps those who identify as men examine their own biases and behaviors and learn about consent, communication, empathy, vulnerability, emotional labor, and violence.

“‘We’ve spent many years addressing survivors and victim behavior, but ethically, and in terms of efficacy, that’s incomplete,’ he adds. ‘We have to address the roots.’ And while course evaluations show that his students typically absorb what he teaches, Mankowski notes, that doesn’t necessarily mean that the class is making a real-world difference: ‘It may change beliefs about gender,’ he says, ‘but does it change behavior?’

It’s not a given, but it’s not impossible, either. Research consistently shows that holding sexist attitudes is associated with gender violence, for example, so it’s not unreasonable to hope that better beliefs can lead to better behavior. Studies have also demonstrated that bystander intervention training — a subject covered in Rethink classes — can be effective at reducing the incidence of sexual assault.” 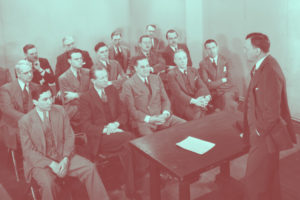