From openDemocracy: The distress, boredom, and disillusionment so commonly diagnosed as depression may actually result from the demoralization people experience in consumerist cultures. Large-scale cultural change, rather than individual mental health treatment, is needed to address this epidemic.

“Rather than a depressive disorder, demoralization is a type of existential disorder associated with the breakdown of a person’s ‘cognitive map’. It is an overarching psycho-spiritual crisis in which victims feel generally disoriented and unable to locate meaning, purpose or sources of need fulfillment. The world loses its credibility, and former beliefs and convictions dissolve into doubt, uncertainty and loss of direction. Frustration, anger and bitterness are usual accompaniments, as well as an underlying sense of being part of a lost cause or losing battle. The label ‘existential depression’ is not appropriate since, unlike most forms of depression, demoralization is a realistic response to the circumstances impinging on the person’s life.” 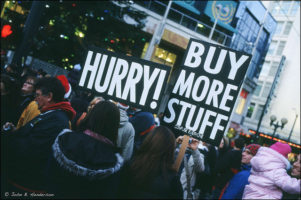