In this piece for ROAR Magazine, Jerome Roos explores the psychological, social, and economic impact of living under the imminent threat of catastrophic man-made climate change.

“As public awareness of these developments grows, many people find themselves riven by an increasingly acute sense of anxiety — about the state of the world we live in, about the self-reinforcing disorder that appears to have grabbed a hold of late-capitalist society, about the relentless death drive of global capital that has sent humanity careening towards the abyss of ecological self-destruction. The resultant social malaise, fruit of a generalized sense of helplessness wrought by neoliberalism’s decades-long assault on all expressions of popular power and collective agency, has penetrated deep into the body politic. ‘No one is in control,’ the late sociologist Zygmunt Bauman once noted. ‘That is the major source of contemporary fear.'” 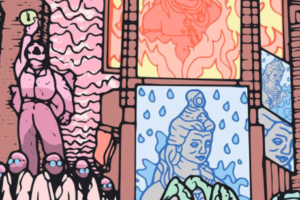