From The New York Times: The opioid epidemic is wreaking havoc on Cherokee families and putting Cherokee children at risk. Now, the Cherokee Nation has filed a lawsuit against several pharmacy chains and big opioid distributors.

“The Cherokee suit argues that the pharmacy chains Walmart, Walgreens and CVS Health, as well as the giant drug distributors McKesson, Cardinal Health and AmerisourceBergen, flouted federal drug-monitoring laws and allowed prescription opioids to pour into the Cherokee territory at some of the highest rates in the country. Such neglect, Mr. Hembree claims, amounts to exploitation of a people.

The companies have responded by asking a federal judge to deny the tribe’s authority to bring the case. They argue that a tribe cannot sue them in tribal court, much less enforce federal drug laws. They have questioned whether a Cherokee reservation even legally exists.” 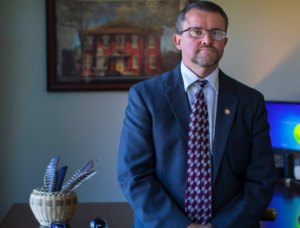