From NPR: Suicide rates have increased in nearly every state over the past two decades, and half of the states have seen suicide rates go up more than 30 percent.

Suicide is a major public health issue, accounting for nearly 45,000 deaths in 2016 alone. That is why the Centers for Disease Control and Prevention in Atlanta decided to take a comprehensive look at suicides from 1999 to 2016.

“Suicide in this country really is a problem that is impacted by so many factors. It’s not just a mental health concern,” says Deborah Stone, a behavioral scientist at the CDC and the lead author of the new study. “There are many different circumstances and factors that contribute to suicide. And so that’s one of the things that this study really shows us. It points to the need for a comprehensive approach to prevention.”

She and her colleagues collected data on suicides from every state. In addition, to better understand the circumstances surrounding suicide, they turned to more detailed information collected by 27 states on suicides that occurred in 2015.

The rise in suicide rates was highest in the central, northern region of the U.S., with North Dakota, for example, seeing a 57.6 percent increase since 1999. Nevada was the only state that saw no increase, and Delaware saw the smallest increase which was 5.9 percent.

The findings were published in the CDC’s Morbidity and Mortality Weekly Report. 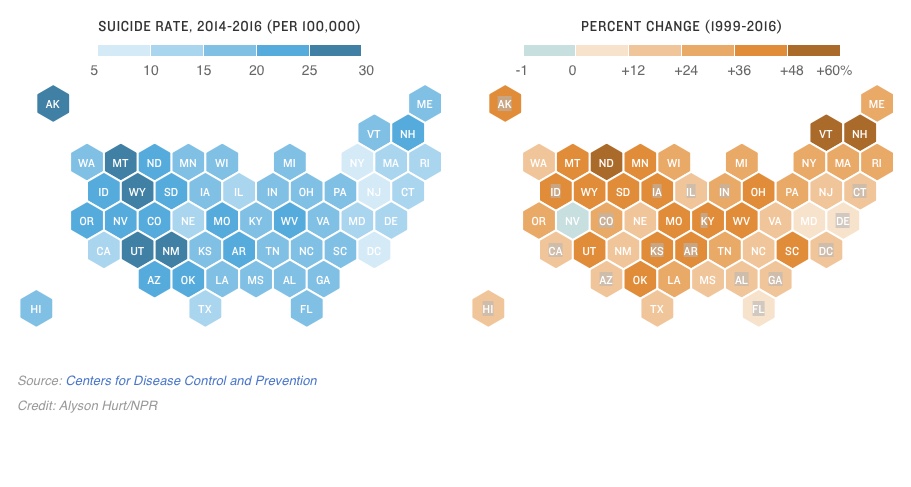 Suicides Are Increasing – And So Are Antidepressant Prescriptions