Suicide rates decreased steadily from the mid-eighties until the new millennium in the USA and, on average, in Organisation for Economic Cooperation and Development (OECD) countries.1 In Europe, suicide rates decreased until around 2007 in most countries.2 Parallel to this drop of suicides, prescriptions of SSRI’s, the new generations of “antidepressants,” gradually increased. This led to numerous publications arguing that the negative correlations between antidepressant prescription rates and suicide rates was evidence that antidepressants are likely helpful in reducing suicide because they can alleviate symptoms of depression, one of the major risk factor for suicide.

Authors of these papers often had financial or other ties to the pharmaceutical industry (e.g., Ulrich Hegerl, Göran Isacsson, John Mann, Zoltan Rihmer).

In 2004, a kind of shock wave hit mainstream psychiatry when the FDA released the black box warning about prescribing antidepressants to children and youth. Not long after, Robert Gibbons and others published a now widely cited paper, based on data from 2003 to 2005, reporting that the black-box warning led to a reduction in the prescribing of antidepressants which was associated with an increase of suicides among young people.3 However, although the article was published in the high-ranked, peer-reviewed American Journal of Psychiatry, the statistical analysis and the related conclusions by Gibbons were quickly shown to be in error; there simply was no increase of suicides associated with the decrease of antidepressant prescriptions (see Jureidini, 20074 and Stone, 20145; see also Robert Whitaker’s report).

Yet, as this has occurred, there has been, in our opinion, a strange silence. There has been a lack of research updates on the trend of increases in suicide rates as prescriptions of antidepressants have risen. And what about research reports on the long-term outcomes of the FDA black box warnings? Two papers pointed out that suicide rates did not increase as a result of the black box warnings in the United States and in Canada (Rhodes, Skinner, McFaull, & Katz, 20136 and Stone, 2014), but these papers were also “silenced” in psychiatry, since they were much less cited (9 and 36 times, respectively) than the Gibbons et al. paper that was cited 569 times (citation-frequency assessed via Google Scholar on August 12, 2018).

Other attempts to show that the FDA warnings led to increased suicides (Lu et al., 2014,7 cited 115 times) have also been debunked (see comments to the Lu article and Philip Hickey’s blog “Suicidal Behavior After FDA Warnings” here on MIA).

This silence about increasing suicide and antidepressant rates, and the silencing of studies that disproved harmful effects of the FDA warnings, was interrupted by at least two noteworthy incidents that demonstrate some deep-seated form of “evidence-resistance.” First, Robert Gibbons simply kept on claiming that the black box warning led to an increase of suicides (LA Times, Feb. 06/2012). Second, a research group around Zoltan Rihmer published a paper in 2015 about suicide trends and antidepressant prescription rates in Hungary, but only used data up until 2006, excluding the time span afterwards when suicide rates increased again (Otuyelu et al., 20158). This way, they of course could prove that increased antidepressant prescriptions came along with reduced suicide rates. No word about the restricted time frame or the increase of suicides in recent years in the limitation section of the paper. They even claimed that their results were an indirect proof of the harms of the FDA warnings (of course citing the debunked 2007 Gibbons et al. paper). They said that, since there was no related warning in Hungary, antidepressant prescriptions kept on rising in young people whereas suicides kept on falling. Otuyelu also cited another paper that “proved” the harms of the black box warning (Katz et al., 20089), despite opposing evidence available at that time (Rhodes et al., 2013).

All of this is the background to our recent research on this topic. Recently, when we became aware of a newly published paper in the Journal of the American Academy of Child & Adolescent Psychiatry that analyzed trends of suicidality and mental health utilization of young people in the US, we wondered why the authors did not also include the results for prescriptions rates, despite that data being available.10 However, since the data was in the public domain, we were able to investigate the association of the suicide attempt rate with drug prescriptions for mood disorders (most likely antidepressants) among adolescents for the years 2004 to 2016.

Our analysis was rejected for publication by the Journal of the American Academy of Child & Adolescent Psychiatry and by JAMA Psychiatry. We were finally able to publish the paper in Epidemiology and Psychiatric Sciences (Plöderl & Hengartner, 201811).

Unfortunately, variables for years prior to 2004 could not be compared to later years, but with the available data we could still explore changes in the rate of prescriptions and suicide attempt rates following the FDA warning. The data is based on the annual National Survey on Drug Use and Health, a nationally representative survey among the US population. Past year major depression was assessed with a structured interview, and participants were asked if they had taken prescribed medication for their mood problems in the past year. We used this as a proxy for use of antidepressant medication. Prior suicide attempts were also assessed. This suicide attempt variable seemed to be a valid indicator of past year suicide risk, since it correlated high with the yearly suicide rates of the same age group (r = 0.75, p < .05).

The usual interpretation by mainstream psychiatry is that our findings are an artefact: young people attempting suicide are more likely to receive mental health treatment, and this produces the found association. This explanation, however, does not fit with the fact that our findings apply both to adolescents with and without a major depression diagnosis. Persons without major depression are rarely suicidal; therefore, in these youths, the strong correlation between suicide attempts and antidepressant prescriptions is hardly explained by diagnosis alone. Also, antidepressant prescription rates increased before the suicide attempt rates did, as indicated via a statistical technique called changepoint-analysis. 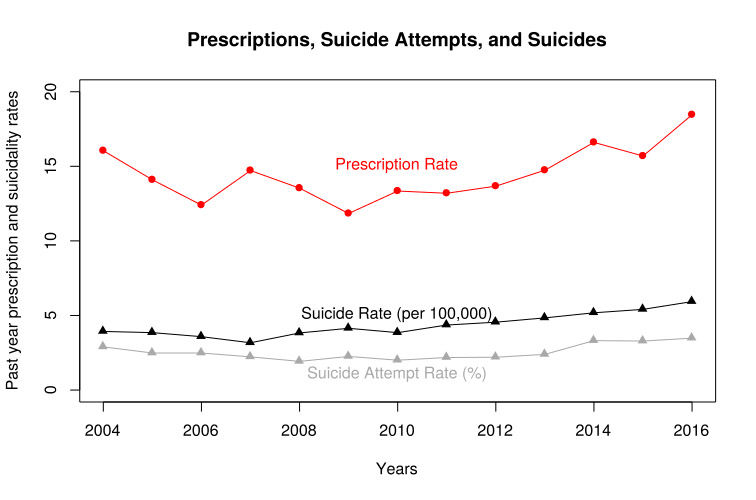 Given the limitations of our study, it is important to look for replications. Indeed, our findings are similar to that of a study by Gupta, Gersing, Erkanli, & Burt (2016).12 By using patient data from psychiatric settings, Gupta et al. found that antidepressant prescriptions decreased from 79 to 60% from the period before the black box warning (2000-2003) relative to the period afterwards (2004-2009). The relative risk for suicidality decreased substantially by around 60-70% as well.

Of note, the relative risk for homicidality and other violent events was also reduced around 60-70%. These findings are exactly what would be predicted by the outcomes of randomized controlled clinical trials. In these trials, young people using antidepressants had higher rates of both suicidality and aggression, compared to those taking placebo.

With our study results, as with all such correlational data, it must be mentioned that causality cannot be inferred, and there are other strong arguments regarding why such data must be interpreted with caution. However, as stated above, our findings are in line with those from randomized controlled trials, where young people taking antidepressants indeed had higher rates of suicide attempts and other forms of suicidality (Healy, Le Noury, & Jureidini, 2018;13 Sharma et al., 2016;14 Stone et al., 200915). Put together, these data strongly suggest that antidepressants can cause suicides and aggressive behavior.

Disturbingly, our study and others reveal that the black box warning is now ignored in many countries, since antidepressant prescription rates for children and youth are on the rise again (Bachmann et al., 2016;16 Otuyelu et al., 2015). This increase is happening despite increasing certainty that antidepressants are rather ineffective and most likely cause suicidal behavior in young people.

It seems that the current strategy in mainstream psychiatry to deal with the problematic evidence base is to recommend fluoxetine, because it was reported as being the most effective drug with no increase of suicidality (Brent, Gibbons, Wilkinson, & Dubicka, 2018;17 Cipriani et al., 201618). Again, problems with these studies and the excess of suicidal events under fluoxetine in the trials continue to be ignored. As with other reports critical of antidepressant prescriptions, these inconvenient findings are not properly acknowledged. As a result, mainstream psychiatry will continue to claim that antidepressants effectively reduce suicide risk, despite compelling evidence to the contrary.