A new study, published in The Lancet, investigates the effects of mindfulness on stress levels during testing periods among a university-aged population. The results of the pragmatic randomized controlled trial indicate that mindfulness training over an eight-week period can serve as a practical component of mental health services that increase resiliency and significantly lower the adverse effects of heightened periods of stress.

“Our study suggests that offering openly accessible mindfulness interventions aimed at the well student population, separate from specific mental health services, is a useful addition to robust clinical interventions delivered by university counseling services,” the researchers, led by Julieta Galante from the University of Cambridge, write.

By the second year of a student’s university career they are more likely to experience symptoms which meet diagnostic criteria for mental illness than the general population, and with a growing number of students enrolled in universities, the issue of university mental health is of increasing urgency. Enrollment in university mental health services has grown faster than overall enrollment rates over the past decade. Whether this can be attributed to a decrease in the stigma surrounding mental health, increasing mental health issues overall, or less resiliency to stress is unclear. However, the growing demand for service calls for a broader student psychological health approach.

Evidence supports the efficacy of mindfulness in the treatment and management of mental health disorders such as anxiety and depression, but less research has been done to examine the potential preventative effects the skill may offer non-clinical populations, or those not currently experiencing mental health distress. The purpose of the current study was to investigate just this.

“In view of the increasing demands on student mental health services, the popularity of mindfulness, and its promise as a preventive intervention, we did the Mindful Student Study to assess whether the provision of mindfulness courses to university students would improve their resilience to stress,” Galante and her team write.

In the largest randomized controlled trial to date assessing mindfulness training for students, over 600 university students in the United Kingdom were randomly assigned to receive either an eight-week mindfulness training and mental health services as usual or mental health services as usual only. The Clinical Outcomes in Routine Evaluation-Outcome Measure (CORE-OM), a 14-item self-report scale used to assess psychological distress, was completed by participants post-intervention and then again during the following examination period.

Results of the study show that both the mindfulness training and treatment as usual groups experienced a reduction in psychological stress and increased in well-being immediately following the intervention. However, the mindfulness training group maintained these effects throughout the year, including the examination period, whereas the treatment as usual group demonstrated an increase in stress over the year, especially during the examination period.

“Distress in the [mindfulness] group was lower beyond the period of the mindfulness courses and into the examination period than at baseline, which is consistent with mindfulness building psychological resilience to academic distress, as are results for perceived problems affecting study or experience. Wellbeing results, and interaction tests showing that the effect might be larger in people who had more stress, support this hypothesis,” the researchers write.

“The 8-week mindfulness course adapted for university students tested in this trial is an acceptable, feasible, and effective component of wider student mental health strategies. Public health increasingly favors interventions to promote mental wellbeing placed in settings such as educational institutions; therefore, whether our findings have a wider application merits further study.” 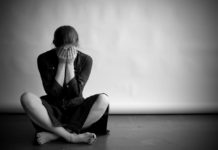